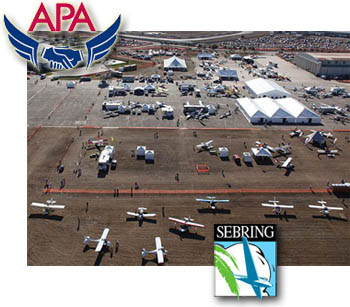 APA will be at Sebring 2011; stop by their booth and ask questions. photo courtesy Jim Koepnick and EAA 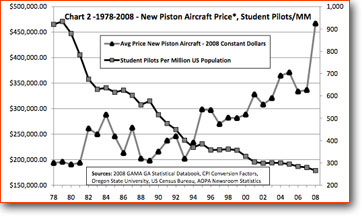 Buy a boat? Or own a share of an airplane? chart courtesy APA

David Kruger is what you might call a data-intensive fellow. A technical background gives him a keener than usual understanding of the value of research. Also an enthusiast of flying LSA, David has invested considerable study into the influence of airplane cost on the pilot population. His analysis suggests partner ownership of an airplane offers a means to confront the problem. At the Midwest LSA Expo I chatted at length with David and his wife/partner, Jaquidon. *** David’s work is revealed in his white papers on the subject. The reports are well considered and researched; AOPA and EAA have recognized the value of his work. If you share the concern about the decrease in pilots, you should read his report on the cost of airplanes and another on reaching the immense population of so-called powersports enthusiasts. Many believe that if aviation is to grow we must look outside our own tightly-knit club. I present here a couple of APA’s charts. *** Simply put, David asserts that the cost of airplanes is closely linked to the decline in the number of students. He wrote, “The untreated underlying cause is the price of aircraft. Progressively fewer and fewer citizens can afford to fly.” Many of us already involved have figured some way to fly whether by renting, shared ownership, or buying lower cost aircraft such as used GA models or ultralights and Light-Sport Aircraft. Yet given that we have 600,000 pilots and 200,000 aircraft (approximately), two-thirds of us still don’t own an airplane. After the high-sales mark in the late ’70s, David wrote, “We did not suddenly and inexplicably lose our love of flying and desire to own aircraft; we started losing our ability to afford them.” *** David and his Aircraft Partnership Association have provided a means to begin a shared ownership arrangement. Using the Internet, APA identifies and links potential co-owners. Finding good, local partners is the tough part of shared ownership and the APA’s website highly automates the task; check out the testimonials. *** The chart comparing the cost of owning a boat put this in sharp focus for me. It shows that with three owners (a manageable partnership size, I feel) the cost to own a $140,000 high-end LSA is comparable to owning a $35,000 boat. It got my attention. Do you see this logic?