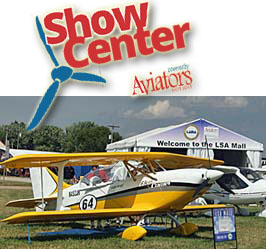 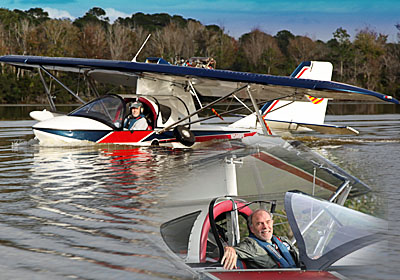 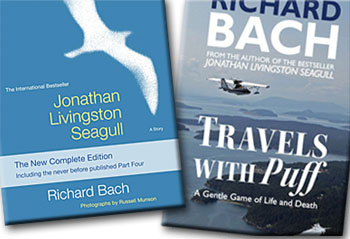 In the tradition of John Steinbeck’s Travels with Charley, Richard Bach’s Travels with Puff recounts his journey from Florida to Washington state in his Searey. 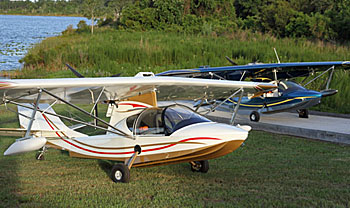 A pair of Searey aircraft at the company’s factory on a lake.

Less than two weeks from now, the season of recreational flying is officially set in motion with the opening of Sun ‘n Fun … the 40th year of the nation’s first major airshow. It will also be year #2 for the new and much-improved Paradise City, formerly known as the Ultralight or Lightplane Area. Alongside the curvy new paved road that loops through Paradise City will sit the LSA Mall at Show Center powered by Aviators Hot Line and this is a place many will visit throughout the week to peruse LSA, light kit airplanes, and electric aircraft. Getting to the Paradise City will be much easier and faster thanks to a pair of six-seat golf carts that will rove the grounds of Sun ‘n Fun and pick up visitors who want to check out Paradise and all the action at this airshow-within-an-airshow. Demo flights for LSA shoppers will be readily available and can be conducted all day long even during the main airshow aerobatics (except for a 1-2 hour period when military teams demand “sterile airspace”). The golf carts are provided for the second year by Rotax Aircraft Engines — thanks Rotax!

The 2014 LSA Mall will feature a special treat, specifically famous author Richard Bach‘s Light-Sport seaplane, a Searey he has named “Puff.” Richard cannot be present himself but Show Center will present his aircraft in the LSA Mall. Last year, he wrote a book about his flight from Progressive Aerodyne‘s factory in Florida to Washington state in his new airplane (Travels with Puff) and in 2014 he released a new book about his later crash of this airplane. Thankfully he and Puff have fully recovered and both have returned to flight, so this is an inspirational story from an inspirational author of 60,000,000 books. Bach’s allegory about a seagull who did not want to accept the limits imposed on him by nature and society became the number one best-selling novel of 1972. Jonathan Livingston Seagull became the biggest surprise of the publishing industry. No one expected a book less than 100 pages long — a mere 10,000 words — to rise to the most coveted spot on best-selling nonfiction and fiction lists. Yet JLS broke hardcover sales records, selling more than 1,000,000 copies in 1972 alone.

The media finally picked up on the allure of this deceptively simple story, and publisher Macmillan finally put money behind it. Jonathan Livingston Seagull went on to sell more than nine million copies in the first five years, and in 20 years, by 1992, the number totaled more than 30 million. In 2014, the sales figure passed 40 million copies. In the ’70s, society was primed and ready for Jonathan’s particular style of rebellion and perfection … a bird who defied the rules. Some may see an analogy to Light-Sport Aircraft that have disrupted the enterprise of legacy aircraft builders. Richard served in the Navy Reserve and the Air National Guard as a F-84F pilot. He worked at Douglas Aircraft, was a contributing editor for Flying magazine, and later became a barnstormer. As part of his exploration of flight, Richard also sampled paragliding. Nearly all of his books involve flight, bringing his son James to state in an interview, “Dad regards flying as his religion.”

Beside Puff the Searey, the LSA Mall will feature a collection of Light-Sport Aircraft and light kit-built aircraft, all within the growing space of Paradise City, which has become the desired location for more exhibitors. Paradise City took a giant leap forward last year after some earlier years in the doldrums and it promises day-long action for those who stroll a short distance from what Sun ‘n Fun calls the “core area.” Some readers of ByDanJohnson.com will head directly to Paradise City. Others will wander through the show’s hundreds of displays but all are welcome to catch a free ride on the Paradise City Xpress … those twin six-seater golf carts driven by Paradise City volunteers. Hop a free ride and be sure to thank your volunteer driver. On your way into Sun ‘n Fun 2014, you can find the big Rotax Aircraft Engine exhibit right on Doolittle Road just inside the main gate. Check out their newest 912iS engine (shhh … it’s still a secret) and offer your thanks for again providing the golf carts in their cooperation with LAMA, the Light Aircraft Manufacturers Association.