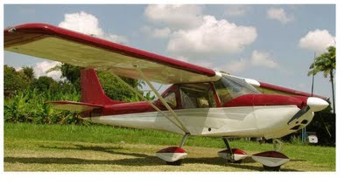 Just when I thought I was approaching perfection in human form, an anonymous reader wrote while I vacationed in the Caribbean (yes, it was sublime) to call attention to a goof I made a few posts back. *** Time to restart the truth engine and put things right. *** In that post I used the phrase “produced wholly in the U.S.” when I described the all metal Eagle EA-100 SLSA, a newly constructed version of which, as I reported, is being shipped soon to Great Barrington, MA up here in the thawing northeast. *** Or as we call it this time of year, Mudville. *** Guess my name’s mud now too. I was misinformed and didn’t doublecheck my facts. Time to strap me to a chopper blade and start ‘er up! *** Although the airplane is completely assembled here in the U.S., the major components are manufactured in Colombia, So. America. *** Here’s the blurb directly from Eagle’s website: *** The airplane was originally designed and built by IBIS Aircraft S.A. in Columbia (sic), South America. 100’s of aircraft have been produced by IBIS since then with no failures associated with the airplane. Eagle Aviation has successfully acquired the rights to produce the airplane and certify it in the US as the EA-100 S-LSA. Eagle Aviation is the manufacture (sic) and builder of the airplane for the US. Assembly, avionics, engine, gear, testing and certification are all completed here in Oshkosh. *** The important things to know are that the main components including welded chrome-moly steel frame, aluminum wing and fuselage skins and other major sub-assemblies are fabricated in South America. *** Once they arrive at Eagle’s factory in Oshkosh, WI., the airplane is actually constructed, avionics installed, and it’s test flown. *** The process is much more than a typical overseas-built SLSA which arrives completely or mostly finished, then reassembled here, custom outfitted for the customer, test flown and delivered. *** That takes a few hours instead of weeks as in Eagle’s case, because the factory is actually doing the majority of the construction, much like an experimental amateur built owner would with a kit airplane. *** As my reader diligently pointed out, it’s only fair to acknowledge those companies like American Legend and Rans among many others which are indeed wholly or substantially American-made and of course contribute directly to the economic recovery by employing U.S. citizens (as well as keeping prices down), so my apologies for clouding the issue.