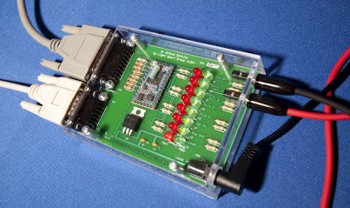 After an arduous shooting/flying schedule at Sebring and several more days in country shooting and flying around Florida, I wung my way home to bang out some stories and pix for the mag. *** And now for the rest of the Sebring story: *** I made my way through the big exhibitor tent at show central and ran into Adam Valencic of Light Sport Group, who cued me in on their latest product. They’re the folks who market the cool wide-angle A/V-ator HD camcorder that mounts in the cockpit and also stores data for later GPS tracking on computer. *** The new unit is called Dr. Rotech. The palm-sized device is an engine electronics diagnostic tool for Rotax four-stroke engines which tests everything electrical: • Generator coil (on stator) • Charging coil (on stator) • Trigger coil (A&B) • Primary ignition coil (A&B) • Secondary ignition coil • Spark plug connector • Ignition switch • Engine ground *** Verifying or tracking down problems in electrical systems such as cracked wires, loose connections and failed components can take a lot of time. With Dr. Rotech, Adam says electrical troubleshooting now runs from 30 seconds to five minutes! *** The device plugs into the ignition module on the engine and the LED readouts shine red if there’s a problem or green if it’s all good, to coin a highly overworked phrase from our modern lexicon. *** Dr. Rotech can also connect to computer via USB for actual readout values. If there’s an intermittent problem, such as a loose connection, the device will count the number of failures for easier problem trackdown. *** “It sure beats having to mess with an ohm meter while checking each individual wire,” says Adam. “It saves a lot of time and is really simple to use.” *** The unit works on both certificated and ASTM versions of Rotax 912 and 914 engines. The engine certification requires that Dr. Rotech be calibrated annually. *** “There’s a possibility we may offer it in a version for two stroke Rotax engines in the future also,” says David  Kotick, the whizbang electrical and software engineer who designed and built the patent pending tool. *** Everything needed is included for $499.