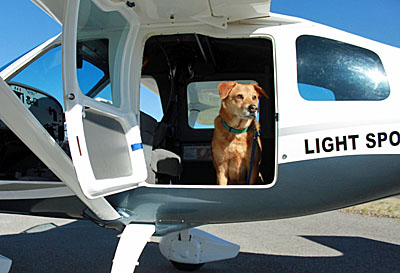 Dogs in the Cockpit? A few years ago, various stories began to pop in mainstream media discussing the car industry’s newest focus …no, not only on how many cup holders they could install in your new ride — but instead on accommodations for pets, mainly dogs.

Easy. Some high percentage of all auto trips include bringing the family pet along for the ride. Design to that and you sell more cars.

Does this apply to airplanes?

Think what you will of this, it’s a fact of modern life in America. Surveys reveal that 44% of American household have a dog, some 78 million critters. More than half of all dog-owning households take their pets when they travel by car. That’s a big market. Cars that can readily allow the family pup to come along — preferably not riding in the driver’s lap with its nose out the window — will find many interested buyers.

Should airplanes be different? 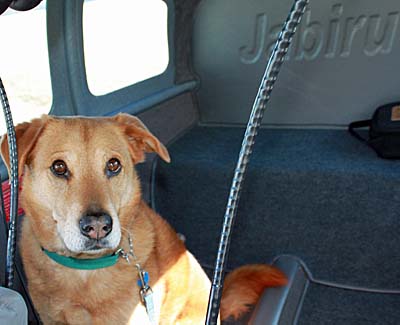 Dogs do love to go for a ride. Our last pooch dug it so much she wouldn’t leave the car even after we got home. She’d stay inside until you took her out.

So when Scott Severen, now the man behind Jabiru aircraft sales, gave reporters at Sun ‘n Fun 2018 a thumb drive with a bunch of photos of dogs inside, I sensed a fun story.

His J-230D LSA sport plane can easily handle the spouse and the family pooch.

No wonder really, as Jabiru sells this same airframe as a four seat kit in Australia, hence a cavernous aft cabin. Three doors is an added bonus.

Jabiru’s big third door aft of the pilot’s door makes an easy task to load your luggage unlike most low wing airplanes where it can often be challenging. Inside the J-230D you can put several bags of golf clubs or a large amount of luggage or a folding bicycle or two …or a few less bags and the family dog. Even larger dogs won’t be cramped. 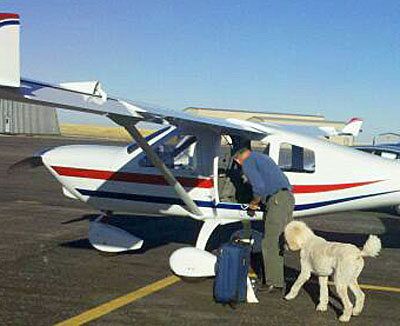 I used to try this in a Cessna 150/150 (it had a 150-horse Lycoming up front). Our dog at the time weighed more than 100 pounds. Flying with two people and the dog meant a reduced fuel load but for short trips it was fine. Once inside, Sunny had plenty of room in the 150’s ample baggage area, but getting the big guy in that space was a challenge.

In flight I used the baggage tie downs and a special dog harness to be sure he didn’t get tossed around should we encounter turbulence. The harness also prevented him from distracting or interfering with the pilot. He didn’t seem to mind; a few minutes into the flight, he would lay down and sleep.

Jabiru J-230D is way better, easier on you, the dog, and the airplane than my venerable Cessna 150.

I can think of quite a few other reasons you might want to have a closer look at US Sport Planes offerings. High on that list are modest prices considering how speedy they are.

Scott was evidently right to include a bunch of dog photos on his media thumb drive. If you’re a dog lover, this should be easy on the eyes.

If dogs aren’t your thing or if you don’t need a spacious luggage area, you are the lucky one with so many LSA choices we had to create a special feature to help you narrow the field. Check out PlaneFinder 2.0.