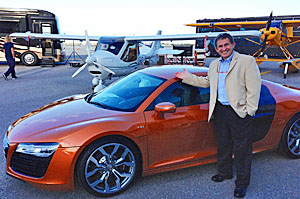 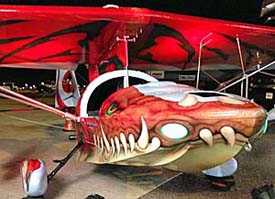 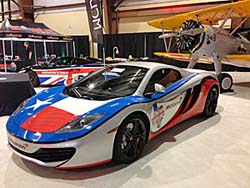 The “testosterone festival” had something to stir the soul of every attendees. 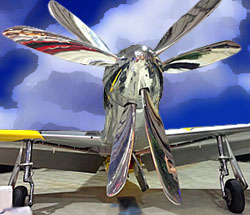 Perhaps the most arresting aircraft was “Precious Metal,” a highly modified P-51 created to race in the Unlimited Class at the Reno National Championship Air Races. It arrived compliments of Kissimmee Florida’s Warbird Adventures. 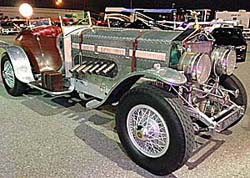 In silver, a Rolls Royce Thunderbolt with its flame-belching exhaust stacks and Merlin engine. ||| In carbon fiber black is the super-exotic $1.4 million Pagani Huayra. 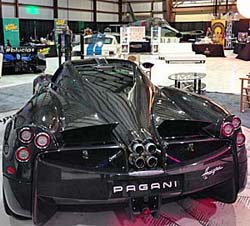 Festivals of Speed is not your “everyman” show tour. Aimed at wealthy folks, Joe Sabatini’s FoS extravaganza is quite different than the usual airshow fare. Some very distinctive aircraft drew plenty of attention … if you could tear your eyes away from a large gathering of magnificent supercars or scores of beautiful people. The event was based at the Orlando International Airport, which meant flying a few Light-Sport Aircraft into the Class B jetport and assembling in and around the giant hangar at Galaxy Aviation FBO. Opening night was hob-nobbing with the well-to-do types that can supposedly afford the goods on display. Via silent auction, Festival of Speed also benefits charities such as Arnold Palmer Hospital For Children.

For the first time, Light-Sport Aircraft were invited (and not asked to pay what surely is a steep price of entry). Representing the fleet were Progressive Aerodyne‘s SeaRey and Flight Design‘s CTLSi. Both were well received and of those well-heeled attendees with whom I visited, the surprises were that they knew about “some easier, lower-cost pilot license” and in a few cases quite a bit about LSA. It appeared that on the eve of the 10th anniversary of SP/LSA, the new FAA class has become a known quantity. Rich folks often become wealthy by watching how they spend their money and I was taken aback by how many people said they had some interest in getting the new pilot certificate. People with fatter wallets than mine were impressed and pleased to hear a pilot license could be obtained for $4,000. Clearly, it isn’t just those in the middle class that celebrate a more reasonably priced point of entry.

As with other non-conventional means to promote flying and doing so with Light-Sport Aircraft, shopping mall displays, appearing at boat shows or farm implement shows, and participating in high-end events like Festivals of Speed helps carry the message of flying to more folks. I think aviation needs to do a lot more of this sort of thing, especially when given the chance to do so without cost. By the end of the three hours it was only a guess as to the value of participation. Will any LSA sell as a result? Umm, probably not. Will someone take lessons toward their Sport Pilot certificate. Yes, maybe. Is it all still worthwhile? Well, it was a just a few hours of the day toward an educational effort and I think aviation needs to do more outreach of this or some sort. A hearty thanks to Jana and Gary Filip of the Sebring U.S. Sport Aviation Expo for including the LSA representatives in this event. Be sure to mark your calendars for January 16-19, 2014. We’re only about six weeks away from the show that starts a new year of flying!