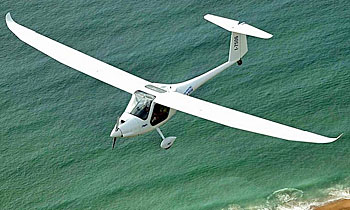 Proud Pipistrel staff members cluster for a photo celebrating the 500th delivery of the Sinus/Virus line; they grouped around the company’s newest model the Alpha Trainer.

A new Taurus G2 Electro is about to be unveiled. 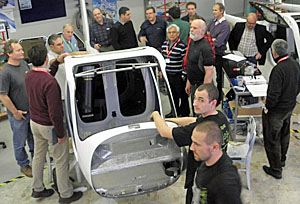 Dealers and mechanics from around the world gathered at the Pipistrel factory for intensive training. 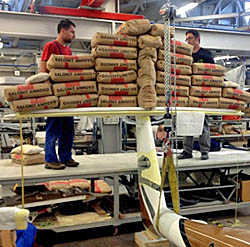 The company’s Panthera four-seater is undergoing testing, seen here on the T-Tail structure.

Known for their several lucrative wins at the NASA Challenge events, Pipistrel also logged market successes in the USA and around the world during 2012. The manufacturer with a range from weight shift trikes to electric-powered gliders to Light-Sport Aircraft to their four-seat Panther in development has become a company to watch. At the end of the year, the Slovenian company with a production facility in Italy had plenty to discuss.

Most notably, the company built their 500th aircraft from the Sinus/Virus family. These sleek machines include the Sinus (“Seen-Us”) motorglider, the Virus (“Veer-Us”) lightplane and shorter-winged version called the Virus SW. The company proudly announced, “Together with the other models and the powered-hang gliders, this means we have made well over one thousand flying devices!” Aircraft number 500 buyer was Charles Dalglish from Australia. The aircraft was handed over to distributor Michael Coates whose organization includes U.S. sales.This year Coates recorded his 100th delivery. Clearly the year just completed was one of significant numerical achievements for Pipistrel and they gathered their staff to celebrate the occasions (photo).

Pipistrel last won at NASA’s Green Challenge with their unusual Taurus entry that featured two fuselages joined by a major electric motor housing. That distinctive aircraft was never intended for production but lessons learned resulted in a December 2012 delivery of their updated Taurus G2 Electro to a father and son from New York. Pipistrel reports the G2 has “improved battery management system, more powerful electrical engine, and the charger is now portable as well.” The aircraft is capable of delivering more power from the batteries with shorter recharge cycles, providing 1000+ cycles with new lithium-ion batteries. New custom-developed cockpit instruments help inform the pilot.

Without well trained dealers and mechanics out in the field, no factory can keep customers or authorities fully satisfied. So, like other top LSA producers, Pipistrel held a dealer training session in their factory in late November. Such gatherings are also a chance to gain feedback from those dealing directly with customers. As Pipistrel reported, “Distributors received important education about maintenance, flight training, new models such as the Alpha Trainer and the Virus SW iS. They also participated in the factory strategic planning by providing market feedback from their countries and new, fresh ideas for our product line.”

Moving beyond their focus of sporting aircraft, Pipistrel debuted their sleekly shaped entry in the four seater category called the Panthera. The company reports getting many requests for an update on its development. Officials wrote that they’ve seen “major advancements in three areas: specialized test equipment, aircraft structural tests, and preparation for certification.” After designing and building structural testing equipment Pipistrel engineers and technicians were able to perform torsion, stress, and deformation tests of aircraft structures. They report coordinating with European governing authorities at EASA to obtain [initial] approval for certified aircraft production. Pipistrel joins LSA builders — Evektor, Flight Design, and Tecnam — in work on a four seat product (Tecnam and Evektor are underway with even larger models as well).