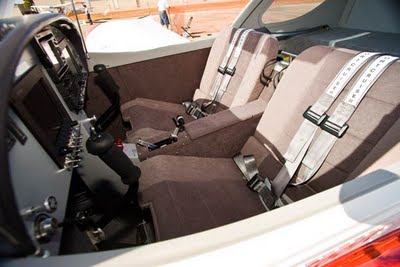 [UPDATE: 1/13/09 at 1 PM Eastern — Following reports by AOPA Online, Flight International’s Flight Global, and Jim Lawrence below… Piper stated that — contrary to reports in Czech newspapers and radio — they have not signed an agreement with Czech Sport Aircraft. Thus reports about the amount allegedly invested much less forecasts of building hundreds of aircraft, are only speculation at this time. I expect to have more info when, and if, any news is officially released. Now on to Jim’s blog…] *** My tin can and string spyphone is vibrating with news that the quiet little rumor circulating for months is about to become reality: Piper Aircraft appears to have inked a deal with Czech Sport Aircraft (CSA), which successfully took control of the former Czech Aircraft Works, and will import and distribute the beautiful SportCruiser SLSA to the American market! *** This on the heels of Piper’s thorough hands–on evaluation of the airplane last summer. *** If it pans out, this is huge news, not only for Piper, which gives it a matching ace in the hole to Cessna’s C-162 Skycatcher, just now hitting the market, but also for Sport Pilots who have anxiously waited to see how the bitter SportCruiser flap would finally settle out. *** Briefly, there was a power struggle, CSA won out, but lately there have been more innuendos of slack maintenance issues around landing gear wearing out and other complaints from SportCruiser owners. *** With Piper’s imprimatur backing the U.S. play, those worries should vanish. *** Word is the venerable U.S. manufacturer ponied up $30 Mil for 49% of CSA. The merger would make it the largest light aircraft maker in the world. *** The story was reportedly picked up by European news sources today, although I haven’t yet to dig up verifying links. Stay tuned. *** But this piece from Flight International names sources saying the deal is done and details may be released by Piper at the Sebring U.S. Sport Aviation Expo next week — or sooner!. *** Meanwhile, the piece serves up some tasty commentary on the shift in vision at Piper after the departure of CEO Jim Bass last year. It’s a good read, have at it. *** I’ll be flying a SportCruiser locally on Thursday, frigid weather permitting, for dead tree Plane and Pilot and will update with the Piper news both here from the field and for the article, as it comes. *** Let’s hope Piper’s picked the right LSA company to get in bed with. *** Sweet dreams!