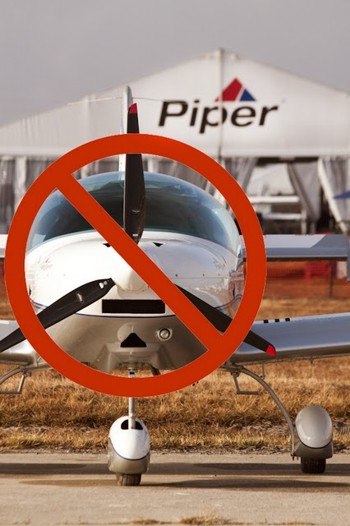 In a tersely worded and OMG-style announcement, Piper Aircraft today said today it “will terminate its business relationship with Czech Republic-based Czech Sport Aircraft to market that company’s Light Sport Aircraft, citing differences in business philosophies.” *** Piper’s CEO Geoffrey Berger said, “After a year working with Czech Sport Aircraft, Piper determined that it is in our company’s best long-term interests to discontinue the business relationship…Clearly, the company (i.e. Piper) has a different business perspective and approach to the market than Czech Sport Aircraft,” he added. *** Piper excited the LSA world with its announcement last year, when helmed by former CEO Kevin Gould, that it would virtually take over rebadging, and upgrading, the popular but problem-plagued Czech Sport Aircraft SportCruiser, a beautiful and popular aircraft. *** “We at Piper have a close affinity with this emerging segment of the marketplace,” Berger continued, “and we have great expectations for the LSA industry. The LSA we were distributing is a good one and we encourage aviation enthusiasts to continue their support of this segment of the market,” Berger added. *** “We certainly understand the implications of this development in the Light Sport Aircraft segment and do not take this action carelessly,” he said *** No word (of course) whether Piper will get back into the LSA segment any time soon…they were pretty secretive about it the first time around. *** I called and spoke with Jackie Carlon of Piper, who dispelled my two initial surmises: *** That Czech Sport Aircraft couldn’t produce in quantity and/or quality, or that the program, brought onboard by Kevin Gould, who was a real mover in repopulating the low-performance end of the Piper Aircraft legacy, was a casualty of his departing the company last year. *** No, and no, says Jackie. *** “Piper made the decision to terminate our master distributor agreement,” she just told me. “We were happy with the aircraft, and it was doing very well in the marketplace. Piper and the distributors were very pleased with the quality. At the end, it was truly a fundamental difference in philosophy. Now, we’ll be focusing on managing the transition process, establishing a plan on how to best do that.” *** When I asked her if killing the program was a change in strategy reflected by the departure of Mr. Gould, she said “Absolutely not, we remain committed to the light end of the spectrum, such as our Archer which just celebrated its 50th anniversary, and our trainers.” *** “Piper supports the LSA marketplace; it’s a good market, with a lot of potential, and we remain very enthusiastic about it.” *** In other words, she wasn’t at liberty to say anything more at this time. *** I’ll do more digging on this. If you have a great airplane, which the PiperSport/SportCruiser is, and quality control and delivery weren’t the problem (so far as we know now), and it’s selling well, then the mystery only deepens. *** More news as I can dig it up. *** But wow, what a shocker…and what a potential morale blow to the industry as a whole.