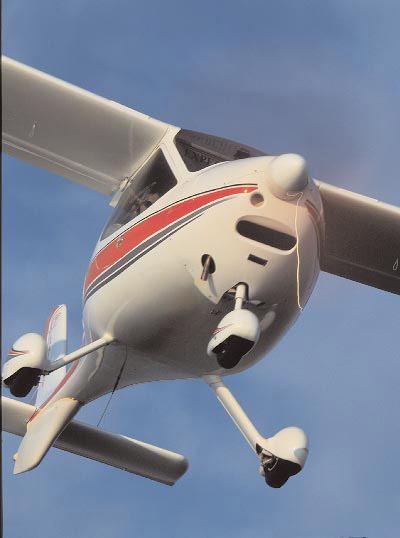 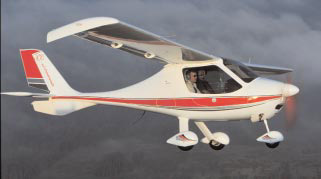 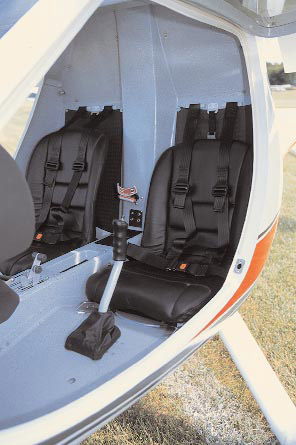 The CT2K serves a different market in Europe, where amenities like leather seats are popular on aircraft that cost $50,000 or more. The CT2K’s cockpit measures a generous 49 inches wide and offers small floor storage compartments under your calves that can be accessed in flight. Note the position of the BRS ballistic chute handle on the aft bulkhead.

Above and below – The CT2K’s exterior is nothing if not smooth and shapely. The gullwing doors are large and open wide helping entry and exit for all pilots, and they secure on the bottom of the wing. Closed, they add to the sleekness of the design. Door locks are standard on the CT Cruiser.

Even with its main spar running overhead through the cockpit, the CT2K offers skylights that illuminate the cabin and provide extra visibility in turns or when checking for traffic. Note the compass mounted on the leading edge spar. 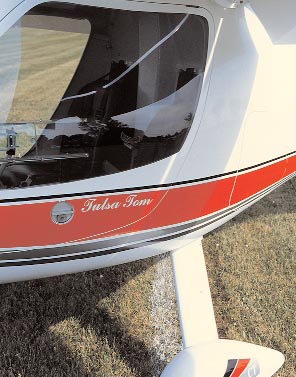 The CT2K features an uncluttered instrument panel that leaves room for a few more gauges if you like. The FlyDat panel, which comes on the CT Cruiser, is roughly similar to United States-manufactured electronic instrumentation packages. Small map pockets are available on either side of the panel. 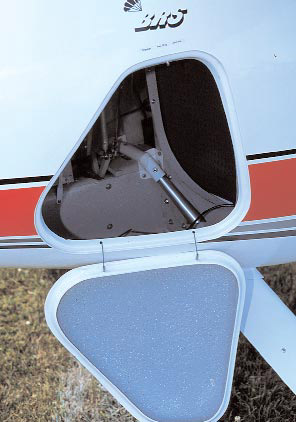 Cargo compartments that can hold up to 55 pounds each are available on both sides of the aircraft. On the passenger side, the cargo door also allows access to the ballistic chute installation.

Flying several hundred miles in a CT2K is a different experience than flying in many ultralights. Tom Guttmann, who brought this CT Cruiser to EAA AirVenture Oshkosh 2002, flew in from Tulsa, Oklahoma, and said the airplane cruised comfortably at an average speed of 120 mph. 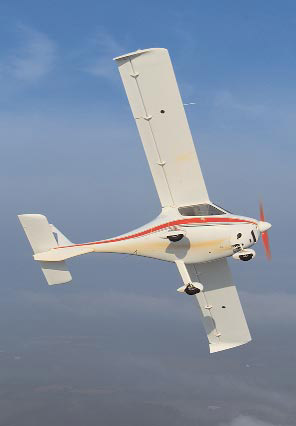 Because the light-sport aircraft category is not yet finalized, Tom’s been flying this CT2K on a reciprocal agreement between FAA and the aeronautic authority of the Ukraine, where the aircraft is manufactured. Accordingly, he’s able to fly it with the faster two-blade Neuform propeller as he’s not restricted to the top speed limitations for the proposed light-sport aircraft category. 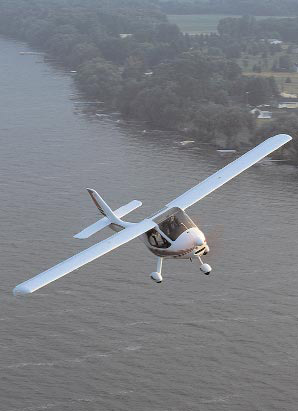 A Bold Yet Efficient Euro-Designed Light-Sport Aircraft
Flightstar imports the CT2K in anticipation of the light-sport aircraft rule.
As FAA’s proposed light-sport aircraft
rule looms ever closer, one
of the first aircraft that will likely
fit the field and be recognized by American
pilots is Germany’s CT. For the U.S.
market, and with a nod to the new millennium,
producer Flight Designs has
renamed the model as the CT2K.
“CT” stands for Composite Twoseater.
It is certainly not alone in being
“white, glass, and built overseas,” a
theme that emerged at EAA AirVenture
Oshkosh 2002. But the design was a
leader in the move from tube-and-rag
ultralights to the modern microlights of
Europe. And it distinguishes itself in a
number of ways that we’ll explore in
this review.
My experiences flying the CT on two
occasions were both with Europeanbased
check pilots. The most recent
opportunity was with Allistair Wilson,
formerly a major with the Royal Irish
Regiment in Northern Ireland. Allistair
has since relocated to the United States
where he is working with former CT importer,
Rollison Light Sport Aircraft.
I first flew the CT not long after its
release while attending an air show in
southern France, accompanied by
French importer, Pascal Chanéau. Between
my first and second flights in the
aircraft, Flight Designs altered the CT to
better address customer comments.
These two CTs weren’t identical.
Reviewing CT2K Features

Cons – Fiberglass and carbon repairs are said to be not difficult, but experience is needed with these materials. At present, the test CT is the only one operating in America.

Pros – Test CT was loaded with extras. Flaps have usual down positions but also up or reflex positions which can be used to enhance cruise performance. Electric start standard with Rotax 912s. Fuel capacity is large. Hydraulic brakes are via lever; work well.

Cons – I struggled to unlatch the gull-wing door for closing when securely belted. Seemed somewhat noisier than another European 912-powered CT I flew in France. No other negatives to this wonderful cabin.

Pros – Very straightforward handling for anyone used to conventional tri-gear operation. Brakes were quite effective. Visibility was very broad (except upward). Large ground clearance. Quite precise to taxi.

Cons – In France my landing was good. At shorter airstrips you’ll need practice to handle the the CT’s long glide; you must plan approaches well. Takeoff roll is long (compared to ultralights), thanks to smaller wing and higher weight.

Cons – Pitch is light enough that some pilots may not feel comfortable. Coordination will take some time to optimize. Adverse yaw is significant.

Pros – Very speedy design. Even with an incorrect prop, I saw speeds of more than 140 mph (though for U.S. market, the CT will be propped down). U.S. model with IvoProp propeller didn’t exceed 132 mph, per GPS runs. Slows down under 40 mph.

Pros – Fitting both German and English certification systems, the CT has normal stall response, longitudinal response, and throttle response – a benefit of such programs. Four-point seat belts are standard.

Cons – Slippery airplane that may be more than some pilots want. Fitted with a parachute, though with the activating handle awkwardly located in case of emergency (see article).

Addresses the questions: “Will a buyer get what he/she expects to buy, and did the designer/builder achieve the chosen goal?”

Pros – The CT has German certification, and thanks to Pegasus, approval under the tough English system. Though $60,000 is a lot of money, the CT is a well equipped model for far less than a certified general aviation aircraft or many homebuilts.