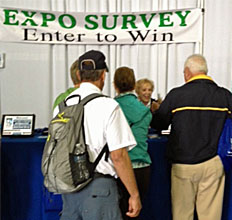 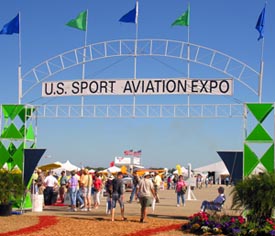 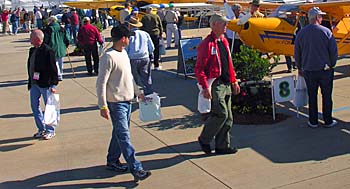 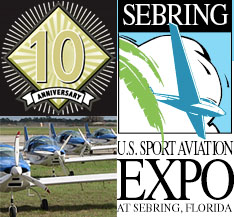 Thanks to a credible survey effort at Sebring 2013, we have some demographic information that is difficult to obtain. We also found out how Sebring Expo’s 20,000 LSA enthusiast attendees felt about the event. On Friday and Saturday, TouchPoll South Florida used six iPad stations to survey 540 respondents, a sample size yielding a 95% confidence factor. TouchPoll reported that only fully completed surveys were used to collect data on 25 questions, which they said took three minutes to complete.

The starting question will surprise few with 74% of respondents between the ages of 42 and 71; the biggest single decadelong age group was 62-71 years of age at 32%, again not particularly surprising. However, one unexpected fact was that nearly 23% of respondents were female (perhaps attending with a male but nonetheless willing to participate in the survey). Another revelation was that the largest single income group was $50,000 and under at about 21% although 46% reported incomes north of $100,000. A third of respondents filled in the middle ground of income. Those with university bachelors degrees or better composed 52% of the total.

How surveyed people found out about Sebring was all over the map with the largest component (38%) being returning visitors. First time visitors mostly credited good, old reliable word-of-mouth. Those motivated by websites and trade publications accounted for a fifth each. Now, here’s a surprise: first-year attendees numbered the biggest group, an impressive 40% with those in their second or third year at another third. So, of nine Sebring shows, 73% are relatively new to the event. Only 6% have been attending since the first years. Two-thirds came by themselves or with one other person, though 28% were in a group of 3-5 persons. Most planned a one day stay (67%) so they didn’t require overnight accommodations. More than 91% came to Sebring without any children 18 years or under, a clear message about how well aviation is reaching out to youth.

An aviation-active state, Florida understandably dominated at 65%. While 35% came from other states around the U.S. — and including 6% international visitors — Sebring is rather clearly a regional show so other events like the Midwest LSA Expo and the Rocky Mountain LSA Expo can help serve other regions. An important question relates to the number of pilots among those surveyed and the answer is 67%. Of those, Private Pilots were 65%, Commercial 23% and more than 20% hold a Sport Pilot Certificate. Those presently owning an airplane was also substantial at 67%. Some 12% planned to come and buy. Extrapolating that to total attendance, we’re talking well over 2,000 potential aircraft buyers. No wonder the LSA industry flocks to this show. Those coming to look at accessory items they want to buy accounted for 38%, or more than 7,000 potential buyers. By the way, 82% of those attending are not in the aviation business; 29% are retired.

How did respondents like Sebring Expo 2013? Very well, I’d say, with 41% calling it “Excellent” (the top rating), and 49% calling it “Good,” for a 90% positive evaluation. Only 3% found it just “Fair.” The choices were five levels plus “Too early to tell.” Many left comments that will help the Sebring Airport Authority and leaders like Jana Filip further improve the Sebring U.S. Sport Aviation Expo as it plans the 10th Annual event for 2014. Thanks to Sebring for providing this useful information. For more on Expo and to see news and other items of interest all year long, go to the Sebring Expo website.