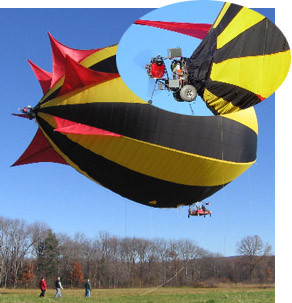 Using no helium, Skyacht’s “Personal Blimp” is “a lighter-than-air foldable airship” that can manuever in ways to make it a potential working aircraft. See it fly in a short video that demonstrates it’s ability to turn tightly.

OK, so it’s a variation of hot air balloon with steering capability. It isn’t a LSA. But, given my fascination with airships, I see Dan Nachbar’s and Mike Kuehlmuss’ Skyacht effort as a neat project. *** Named after the aviation pioneer, Alberto (Santos-Dumont) is not a pure hot air balloon as it uses aluminum tubes and a tension line to add rigidity. Twin burners create hot air as the lifting medium. Presently a gas engine drives and maneuvers Alberto, but a quieter electric motor is planned. Alberto first flew in October 2006 and has logged more than 10 hours. It can be folded something like an umbrella so the 102-foot long, 70-foot wide envelope plus its gondola fit in a 24-foot car trailer. Cost: somewhere between $100,000 and $200,000 which is tons less than the cheapest helium blimp at about $2 million. *** I thought this a light hearted topic with which to end 2006. Happy New Year! UPDATE…Jan. 3, 2007 — After the SPLOG was posted, Dan Nachbar added this response. “We very much hope to build a light-sport version some day. However, the FAA botched the Light Sport rule when it comes to LTA by limiting the max weight to an impossibly low 660 lbs. That’s why you haven’t seen any Light Sport LTA yet. The FAA says they recognize the problem and will fix it ‘real soon now.'”