Easily the most unusual trike at AirVenture was the Escape Pod from Seagull Aerosports. The new model is also the world’s first fully enclosed trike.

A study in contrast: Steve Rewolinski’s custom nanotrike in front of Al Reay’s highly customized Titan Tornado. Both flew in the pattern at AirVenture 2003. All the trikes in this column combined have less power than the Titan. 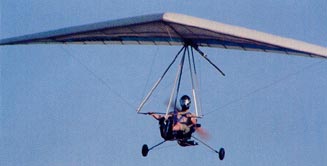 Approaching for landing at the Oshkosh ultralight airstrip is Steve Rewolinski’s reduced-drag trike.