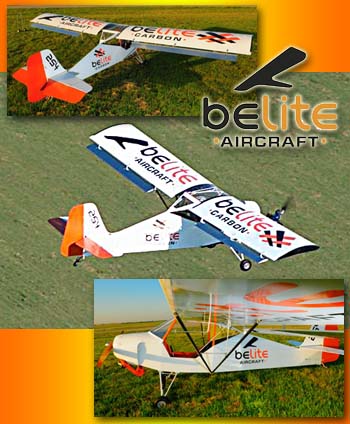 Captured on camera aloft on its first flight the Belite Part 103 aircraft flew on July 4th and will make an appearance at AirVenture (see it in the North Aircraft display area, spaces 612 & 615). The company says it will be offered for sale as a kit or fully assembled. Read more on Belite’s blog page.

Part 103 ultralights seem eclipsed by the attention awarded to Light-Sport Aircraft. But a Wichita tech entrepreneur who sold his business is now pursuing aviation focused on the airplane formerly known as the Kitfox Lite. *** James Wiebe bought the rights to the single seater, opened shop as Belite Aircraft, and immediately started replacing aluminum and wood components with carbon fiber. The result is a genuinely light aircraft than can make Part 103 with several pounds to spare. *** On July 4th, as America was blowing off fireworks, James fired up his 28-horsepower Zanzottera MZ-34 engine to make his maiden flight. “While the rest of the country was focused on celebrating independence, I was experiencing it, making lazy circles in the sky above Jabara Airport,” Wiebe expressed. As flown, the airplane weighed approximately 245 pounds and that included the optional rear window and a full VFR panel. Belite incorporates the use of proprietary, lightweight carbon fiber material in the fabrication of struts, wing ribs, wing spars, cabin, and firewall. Wiebe orignally planned and will still move toward electric power for Belite; Part 103 ultralights may represent the best aircraft segment in which to experiment with electric powerplants.