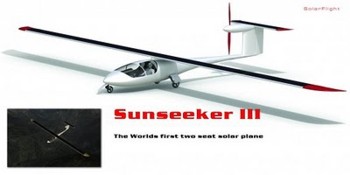 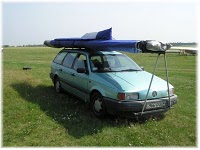 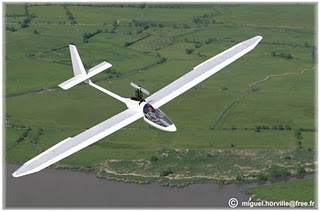 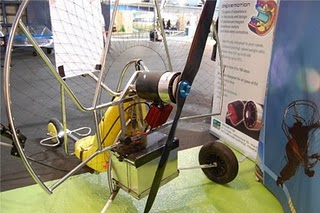 A couple days ago I promised to follow up on the Paris Green Air Show so here we go. *** The show is held (2010 is the 2nd year) at the Musee Air + Despace, at Le Bourget airport, the field where Charles Lindbergh landed the Spirit of St. Louis and where the huge Paris Air Show takes place every other year (next up in 2011). *** It’s mission statement is implicit from the phrase on the evocative splash drawing: “L’aviation du futur”. It took a bit of digging and some web translations to find out more about the show that Gizmag first posted about the other day. *** The explosion of imaginative designs and concepts at the show is staggering: very much like the first years of aviation after 1903. Dirigibles large and small, including man-powered balloons; aircraft engines with zero CO2 emissions; aircraft powered by electric, solar and hydrogen fuel cell engines; noise and pollution reducing sustainable development concepts for airports, runways and aircraft “villages.” All in all, quite a hoot; I’d love to go to the next one. *** Exhibitions included: Sunseeker II and III, Eric Raymond’s solar-powered motorglider that has 121 hours of flight logged and has crossed the U.S. on sunlight alone. Alatus-M, an electric-powered ultralight composite motorglider with some amazing features: cartoppable like a hang glider, meeting German and American standards FAR-103), retractable engine platform, one person/40 minute setup. Electravia electric engine delivers 26 hp and a 1 hour 30 min. flight time. Empty weight is 253 pounds, with another 264 pound load capability. At current exchange rates, you can buy one today for $43,400. The APEV electric Demoichelle, an ultralight-style “flying ladder” wing and three-axis framework, initially powered by a small Rotax, now fitted with an electric engine: the AGNI 112 R electric motor, with Lithium Polymer KOKAM 74V batteries And here’s a shot of the electric powerplant for the e-Fun Flyer para-trike I mentioned last post. *** Lots more to read about, check out the links above.