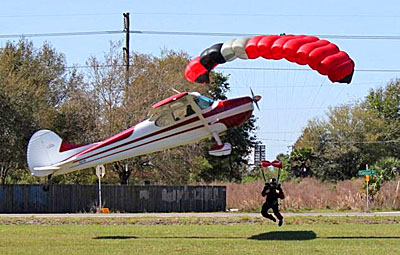 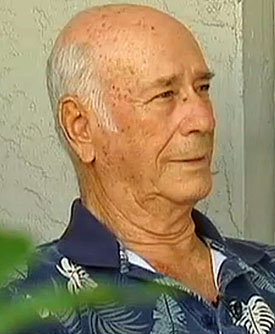 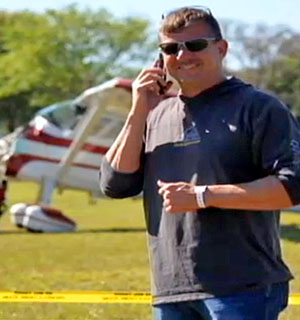 Here’s a fitting story for the weekend. I have more airplane news for next week, but this… well… what a time to be standing somewhere with your camera at the ready.

The story isn’t new. The article with accompanying video was posted March 8, 2014, but the photos only recently came to my attention thanks to a family member who knows how I follow aviation and knows of my background at BRS parachutes. (Thanks, Earl!)

The story was broken by Fox 13 TV in Tampa Bay, Florida. The “witness” referred to in the Fox 13 video story was Tim Telford who captured the shots that I assembled into a short movie below. I certainly marveled at the images he captured. These 18 images represent only a brief moment in time.

The rest of the story that follows comes from the Fox 13 reporter, Aaron Mesmer. You can read it all and see their video here.

Mesmer reported, “Two men were hurt Saturday morning when a plane collided with the parachute of a skydiver in Mulberry.”

The airport where the collision occurred is the South Lakeland airport situated very close to Sun ‘n Fun. Many of us have flown from the old Circle X field for years. It is both an active airport and a base where sky diving is pursued, which may explain the potential for conflict, though I am not aware of any other incidents.

“I have never seen anything like this and this is the last thing I thought I’d see today,” said Tim Telford, who took pictures of the midair collision as it happened.”

Mesmer continued, “The skydiver, 49-year-old John Frost of Gainesville, Florida was flung to the earth. The plane nose-dived into the ground.

“I thought they were both seriously hurt. We rushed over there,” said Paul Fuller, one of Trembly’s friends who was also watching from the ground. “He’s a pretty good pilot. He’s been flying all of his life, probably 60 some-odd years.”

Mesmer reported that both men were taken to the hospital, however, neither was seriously injured. Frost was treated and released. Trembley was held for observation. He suffered some cuts and bruises but after landing directly nose first on the ground and being an elderly man, it is quite remarkable he was not more critically injured.

“Both these guys walked away [relatively] unscathed,” Telford, the photographer said. “A scratch here, a bruise there and I think both are just happy to be here today.”

In the Fox 13 video both men said they took some action to avoid more serious injury. Cessna pilot Trembley reported pulling up so as not to collide directly with the sky diver. Frost said he took evasive action, too.