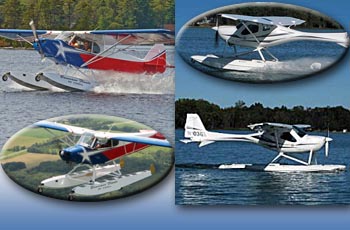 Different Floatplanes for Different Buyers — The Legend FloatCub is a vintage design, fabric-covered airplane on all-metal floats. Contrarily, the Remos GX is a contemporary design built significantly of carbon fiber with composite floats. Well, they both have high wings and that’s probably best for a floatplane. Legend FloatCub photos by Bob Hirshberg, Scruffyy Productions *** Remos photos by Ken Godin

We’ve arrived at the end of the main float-flying season, but two of our largest Light-Sport Aircraft manufacturers just announced floatplane models. Welcome to the American Legend FloatCub and the Remos GX on floats. Each company contracted with float experts (a big difference from SeaMax or SeaRey). *** The most successful American LSA producer, American Legend won approval on October 2 for their Amphibious Legend FloatCub after declaring they met ASTM standards. FloatCub was put on sale for $159,000 and the first customer aircraft is being assembled. Legend went to long-established float company, Baumann Floats of New Richmond, Wisconsin. The new model flew in July, 2009 and made an appearance at Oshkosh. Unlike original Piper Cubs that were often put on floats, the Legend Cub has doors on both sides, a big benefit when docking. If purchased with the 120-hp Jabiru 3300, Legend FloatCub should prove quite energetic even at high elevations. *** After Oshkosh 2008, Remos chose Downwind Technology in Menasha, Wisconsin to supply their Shark Floats; and subcontracted Aero Sport Outfitters to perform the installation. Like Legend, Remos showed their airplane at Oshkosh this year. After the show the final work was completed and the new model first flew on September 30th. Sales director, Ken Godin, reported the Remos floatplane was licensed in the Research and Development Experimental Category (“the first LSA aircraft to do so,” he said). Test flights and performance data will be collected for the next few months and the aircraft is projected for “delivery in January or February, 2010.”