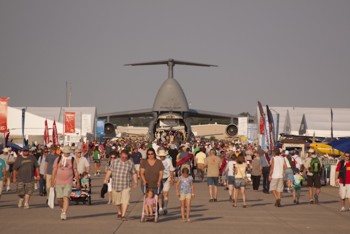 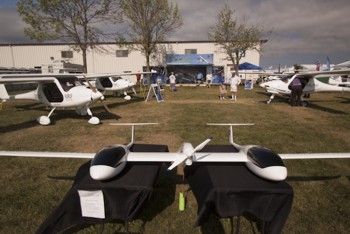 The large Pipistrel display near Air Show Central makes it clear: this major LSA Slovenian company has come to play, and play big. 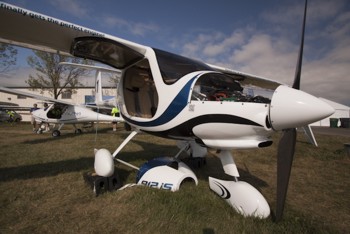 The Pipistrel SW (Short Wing) has been flying with the brand-new Rotax 912 iS fuel-injected engine that made such a big spash at Sun 'n Fun, 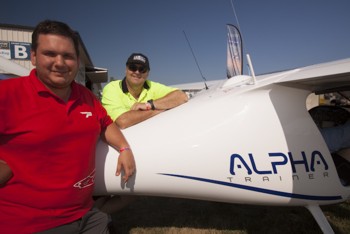 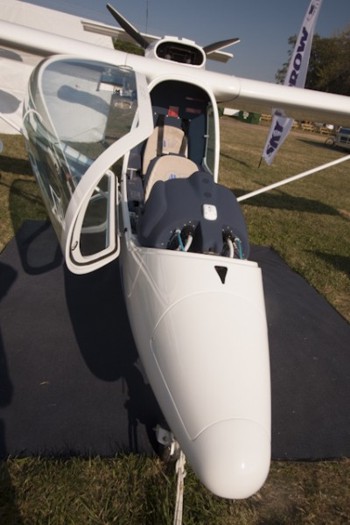 Another look at the Sky Arrow. The rear seat is raised for superb visibility for both instructor and pilot. 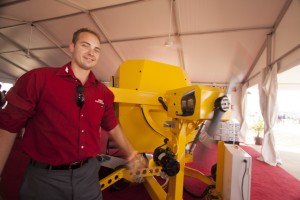 There's even a little prop on the front that you give a spin to start the simulator program! 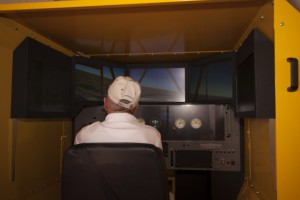 Check this out: a six-screen Piper Cub motion simulator from Redbird. 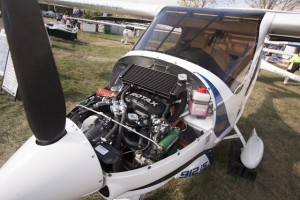 The Pipistrel Virus SW with Rotax 912 iS fuel injected engine. 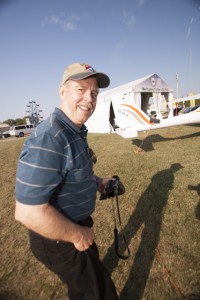 Pipistrel in particular seems to be riding the crest of ever-growing reputation. It’s new Alpha Trainer, which I’m scheduled to fly tomorrow morning, lucky me (I’m the first US journalist I think to have the privilege), is already selling and selling well, with at least a couple checks changing hands at the show earlier in the week and another sold by Rand Vollmer, the Southeast Pipistrel go-to guy, today, the $83,000 ($89,000 with shipping from Slovenia and U.S. set up and other costs factored in) is staged to make a big play for individuals and flight schools who are ready for an aircraft that is truly cheap to fly (2 gph in training takeoff/landing circuits, 3-3.5 gph at 107 knot cruise…and all this on an 80 hp Rotax 912!) and representative of a progressive, brilliant design team that promises more exciting developments in years to come. *** Exciting as in the Panthera 4-seat Ferrari-like cruiser that is currently in development for 2013 delivery as a certificated airplane in Europe…2015-6 in the U.S *** Pipistrel is a bold, imaginative company of forward thinkers like company founder Ivo Boscarol, award-winning engineers like project leader Tine Tomazic and savvy marketers like U.S. importer Michael Coates and hard-working, professional dealers like Rand Vollmer. I love this company, I have no reservations about saying it. When I think of Pipistrel and the aircraft it has already produced, not to mention some still-secret electric-powered aircraft in the pipeline, I smell the future of aviation. *** The paradigm has shifted, and visionary companies like Pipistrel will lead it. *** Time to sack out. Even a breezy day in Wisconsin summer heat takes it out of you. Enjoy the pix. More tomorrow on the Alpha. *** A brand new Sky Arrow from new owner Magnaghia was on display in the Hansen booth near the LSA Mall. This 20-year-old design is ASTM-approved and a popular tandem trainer with the Able Flight program for physically challenged student pilots that’s thriving at Purdue University.