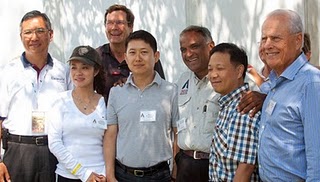 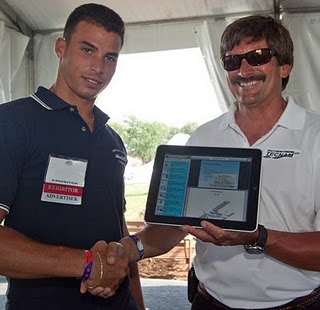 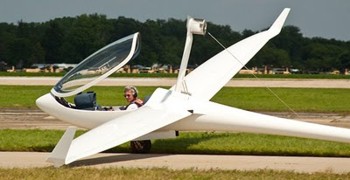 The Sleeping Giant Wakes… Big news from China: IndUS Aviation threw a big lunch bash today at Oshkosh to break word of its exciting new program to shift production of all its Thorpedo LSA to China, as part of a unique collaboration with the country’s government and private industry to begin to grow Chinese General Aviation. *** The program will launch this fall at the new LuYangHU General Aviation Development Zone in Weinan, China. There is currently no GA permitted in the country. This will be the first — carefully studied and controlled, to be sure — attempt to bring private aviation to Chinese citizens: a fascinating period in history, and one that, with this partnership, aims to open the country wide to sales of light sport aircraft from all over the world. *** Indus will build LSA for its domestic market as well as worldwide — including Chinese citizens. *** Boeing, Diamond, Cessna and Airbus have also established manufacturing sites at Weinan, but Indus is the first LSA company to be invited to build a “primary entry level aircraft in large numbers to meet the expected demand for such aircraft in India and China,” said Dr. Ram Pattisapu, IndUS CEO. *** The “prototype” airspace will be 124 square kilometers (50 sq. mi.) in size, with a legal ceiling up to 3,000 meters, and will be the only place for now where private Chinese aviators will be allowed to fly. Congratulations to all involved. *** Had a good talk with Tecnam’s Ray Swanson, VP of Distribution and Avionics, about the company’s new iPad (or computer)-based Sport Pilot Course which was introduced here and will be offered to TFC (Tecnam Flight Center) members across the country. *** Through TFC, flight schools can gain access to software flight training programs, such as the Tecnam Sport Pilot Course Dan demoed for me and P&P Publisher Mike McMann. I’ll be going through it in a few weeks as I refresh for my biennial flight review in Nov. *** The programs were developed in collab with MS Aviation and Hilton Software, LLC to maximize student pilot training. *** Students can carry the iPad with them everywhere, drop it into the center panel slot on their Tecnam trainer for geo-referencing sectionals, airport info and much more. Tecnam North America Prez Tommy Grimes, above, presents an iPad loaded with the Sport Pilot course to the first student to go through the program. *** Course materials are constantly refined and uploaded wirelessly to students…very cool, I’ll have more on it down the road. *** Today I spent the day dreaming of electric sheep… or airplanes, listening to an all-day symposium with the likes of legendary aeronautical designer Burt Rutan, FAA’s head Randy Babbitt, Bertrand Piccard who spearheads the Solar Impulse project, Erik Lindbergh, visionary grandson of Lucky Lindy himself, Craig Willan, emcee, research engineer and I gather the person who brought these luminaries and several others under one roof for the EAA Electric Aircraft World Symposium 2010. *** It was fascinating, and I’ll have more to say about it when I put the article on electric flight together for Plane & Pilot but here’s a few highlights: *** Rutan: “I want to watch the young designers, I want to inspire you to do the new stuff even if it doesn’t work right the first time. I want to see an electric manned aerobatic airplane here at Oshkosh.” *** Chris van Buiten (Sikorsky’s Firefly electric helicopter): “Electric airplanes are hard; electric choppers are very hard.” *** Piccard: “The bottleneck in manned electric flight isn’t energy capture, but energy storage. The Solar Impulse project (which flew all night recently on battery-stored solar power) is not only an airplane project but an energy project. We proved we can fly all day and all night and have energy left over.” *** Eric Lindbergh presented the 2010 LEAP awards — and $25,000 in cash prizes (which recipients donated right back to LEAP!) — to: Yuneec for its e430 (Best practical electric aircraft) Sonex (Best electrical aircraft subsystems) and the Antares 20E electric motorglider (first certified production electric aircraft.) *** I watched the Antares fly yesterday (see photos). Two words: most impressive. *** General Electric, Tesla Motors and Ford Motor Company all had excellent presentations on electric-powered cars and discussed applications and implications for electric flight. *** As I’ve said before (and Erik Lindbergh among others echoed today), these are the Wright Brothers days of electric flight. So what if flight times are “only 1 or 2 hours” so far? Remember how long the Wright’s first flight was? *** Of course, many technical challenges are ahead…but the first flights are happening, history is being made, and interest is surging, as this well-attended seminar in the vast EAA Museum Eagles Hangar proved today.