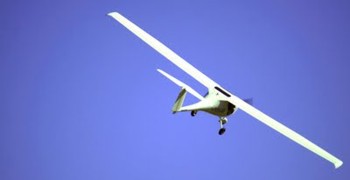 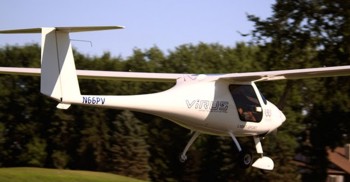 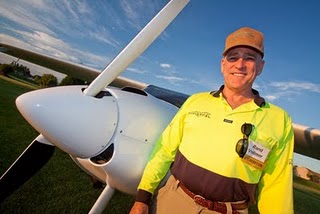 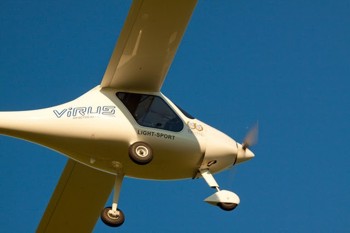 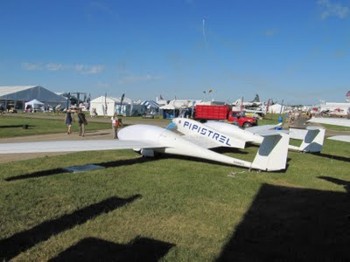 After my own Labors of Hercules, I arrived at the EAA Oshkosh Airventure seasonal highpoint event Tuesday mid day. Since it was a beautiful day by anybody’s standards, I decided not to brave the hordes at the show and headed out, once I got settled in my digs for the week, to a lovely little airport named Brennand about 10 minutes northwest of EAA’s Wittman Field show grounds. *** I was in luck with more than just weather: the San Antonio Light Sport Aircraft (SALSA) gang from Texas was there demo-flying its all-composite Pipistrel Virus SW 80/100, tricycle-gear (there’s also a taildragger version), composite touring motorglider. *** The Pipistrel line includes several designs I have admired from afar but not had the opportunity to share air with. *** All that changed when Salsa’s prime mover and shaker Rand Vollmer introduced me to a big, friendly Texican fella named Dave White. *** Dave is Salsa’s Sales Director, chief glider/motorglider instructor and demo pilot out at Brennand Airport, which, by the way, is one of those lovely, quiet airport communities I think we should all get to live on either in this life or the next one. Green grass and trees, lovely homes, quiet, no hassle backyard flying: can’t ask for much more than that. Anyway, Dave said, “Hey, I just had a demo cancel, want to go up?” *** Do Pope wear tall, funny looking hat? *** Ten minutes later I was taxiing the light-handling, 40-foot span Virus — which as everyone hastens to mention is a terrible name for a wonderful airplane. It comes from Slovenia, where virus is pronounced “vee-roos”, which sounds a whole lot better than the way we say it). *** The wonderful-airplane part is fully realized after just a few minutes. I haven’t flown anything but a Cub for the last 3 months so I’m stomping that poor airplanes rudder rather mercilessly, but the airplane doesn’t seem to mind at all. And in just a takeoff, a couple turns and listening to Dave obligingly talk me through everything — and letting me really get to know the airplane by letting me do everything, a wonderful teaching style — I’ve learned one important thing: The Virus SW is a real sleeper of an S-LSA. Check out this video: *** I’ll have a pilot report on it in the magazine soon. *** The Cliff Notes version: *** Virus handles more like a plane with a 30-foot span, has a 45-45 roll rate around two seconds, has light, balanced control feel, turns quickly and with virtually no adverse yaw — I pulled turns left and right without any rudder at all and it obliged with nary a complaint. *** The airplane, which is built for lightness and thus has a 660 lb. useful load — though it’s max weight is more than a hundred pounds below the LSA ceiling weight of 1320 lbs.!, hangs on in soaring turns to the lightest little bug fart of a thermal, which became evident in calm, 6:30 p.m. air where I, the newcomer, was able to make a few turns in just a bit of a bubble and approach zero sink for a few seconds. *** Glide ratio by the way is 24:1 and sink rate is around 250 fpm. That’s plenty good enough to shut down and let the earth/sun/sky engine keep you up for hours. And the robust top-o’-wing, hand-lever pop up air brakes give great glide-slope control for landing. Dave demonstrated a most impressive dead-stick landing using only the brakes for putting her down on the narrow paved strip at Brennand. *** Handling is light and nimble, cruise is ridiculously efficient — we saw 112 knots at 80% power and remember, the engine is an 80hp, not 100hp, Rotax. The Euro version which isn’t restricted to top speed approaches 150 knots max level cruise! Yes, a very, very clean airframe, and you feel that when you fly it. It’s a joy, very forgiving too (especially with that big span). *** Salsa has a variety of motorgliding training and buying options. And you won’t find many places better to earn your soaring chops than the big-thermal country of Texas, where numerous soaring records have been set for decades. *** Give these guys a closer look, they’re fully dedicated and devoted to demonstrating the benefits that learning to fly powered soaring aircraft bestow, not only on new and experienced pilots, but on the future of GA itself. *** Their brief thesis, which I’ll explore with Rand in the article more fully, is that pilots can get their glider rating much cheaper than any other ratings, learn a great deal about flying, and have much more fun at it than merely crunching through the syllabi and getting handed a certificate. *** Motorgliding, they believe, creates pilots who experience and learn to understand the vital nuances of flight in a way that will stick with them throughout their flying lives. *** Pipistrel has showed up in a big way this year with a choice display in front of Hangar B near Airshow Central or whatever they’re calling it now. *** Prominent is its Taurus Electro G4, the 3,000lb.+, four-seat, all-electric motorglider that’s competing at September’s CAFE Green Flight Challenge. The two-fuselage aircraft is drawing a lot of attention, and once all the requrements to compete legally (as Experimental Exhibition aircraft since there is yet to be an FAA standard for electric-powered aircraft) are met it should have a good shot at winning the $1.3 million prize. *** Jim Lee of PhoEnix, the electric version built for the race that’s in test and development now, tells me there are so many hurdles for so many of the entrants, it may be postponed again. It was originally scheduled for earlier this month but nobody was ready. *** Off to the show…in the rain!