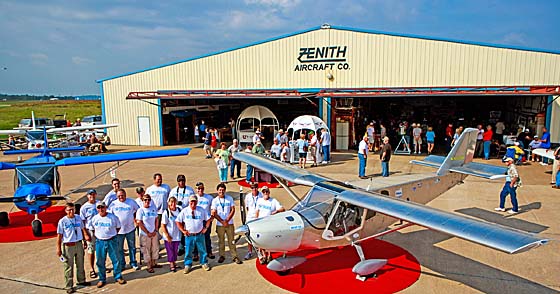 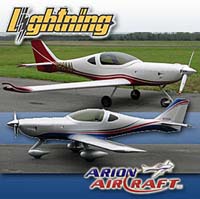 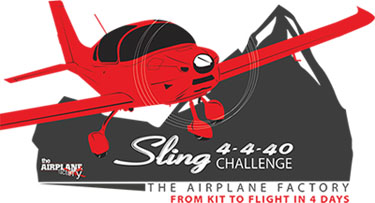 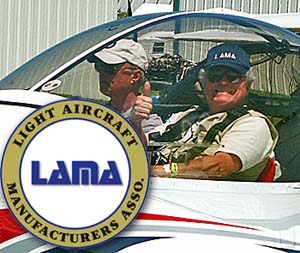 Last weekend Zenith Aircraft held another of their open house events. At the Midwest LSA Expo a few weeks beforehand I asked factory pilot guru, Roger Dubbert how many people the company expected. His answer: a rather amazing “700.” According to Zenith president Sebastien Heintz it was indeed another strong event, one they’ve repeated every year since setting up shop in Mexico, Missouri. “By all accounts and measurements, the 23rd annual Hangar Day was an incredible winner,” summarized Sebastien. Among the highlights of the two-day festivities was the arrival of EAA’s two Zenith aircraft. One was an EAA staff-built version of the CH 750 Cruzer (watch for our video pilot report to be posted soon) and the second was the One Week Wonder CH 750 that was completed during AirVenture with participation from over 2,500 people.

As Arion Aircraft‘s Nick Otterback put it, “Since this month seems to offer many open houses I wanted to share ours. We are hosting our Seventh Annual Fly In Open House; we have held it the first weekend in October since we started Arion.” As reported earlier Jabiru USA is celebrating 15 years and coordinated with Arion to hold their open houses on the same weekend. “We thought that was a great idea since most Lightning owners fly behind Jabiru power,” added Nick. The company holds a cross country air race for bragging rights every year. “We have a Light-Sport Class, an Experimental Class, and an Unlimited Class, the latter for all of our fast kit friends and Arion’s new XS. It has been a lot of fun over the years and made for some good ribbing among owners over the years.” In the one-more-thing department, Nick noted, “If you want to see possibly the worlds largest Jenga game we’ve got it!” For more details, check with Nick via email or phone: 931-680-1781.

Are you wondering what on Earth is a “4-4-40 Challenge?” It got my attention, too. Following on the huge success of EAA’s One Week Wonder building a Zenith Aircraft CH-750 during AirVenture 2014, The Airplane Factory is repeating an earlier challenge of their own. This time a team of 40 workers from Sling designer and manufacturer will attempt to build and fly a four seat kit called Sling 4 in only four days! The build is taking place as this is written at the 2014 Africa Aerospace and Defense Expo at the Waterkloof Air Force Base in South Africa. The team is working around the clock, with the day and night being split into 10 and 14 hour shifts, respectively. “This is not the first time that The Airplane Factory (TAF) has undertaken such an exciting project,” reported company officials. Back in 2011, the Sling 5577 Challenge combined efforts of five men from the factory and five women who never had touched a rivet gun; they built a two seat Sling in seven days. This year on only the second day, TAF said, “A Sling 4 has been born … well, just about! The team has made great progress on Day 2, so much that Mike Blyth, team leader of the build, declared that they are ahead of schedule.” I’m no longer surprised by TAF projects. This company has not only built many airplanes for customers but has flown both their two seat LSA Sling and the four seat Sling 4 around the world, both shortly after the designs were completed. They should wrap up the speedy build in just four days.

Wrapping up this piece, I wish to extend a “Happy Birthday” to an old friend of mine but also a man who was instrumental in the forming of the light aircraft space as we know it today … such space now including Light-Sport Aircraft, light kit aircraft that Sport Pilot can fly, ultralights, and even Light GA airplanes referred to as LSA 4.0 that are getting ready to invade the factory certified aircraft sector. The man and my friend is Larry Burke who just celebrated his 80th birthday though you’d never guess he’s accumulated that much wisdom. Larry can’t get away to all the shows as he once did but he graced Sun ‘n Fun 2014 with his smiling face and he consented to a video interview that appears below. Larry Burke founded the Light Aircraft Manufacturers Association back in the early 1980s and it still flourishes today thanks the solid guidance he offered back in the “wild west” days of the first ultralight aircraft. Whether you know it or not, you owe a debt of gratitude to Larry for his work over decades. In my role as president of LAMA I still often ask his counsel and he is always quick to offer his perspective as an engineer, entrepreneur, designer and builder of aircraft, and great enthusiast of light aircraft. Thanks, Larry!

Catch a number of scenes of early light aircraft assembled by SportAviationMagazine.com in this video interview with Larry Burke.