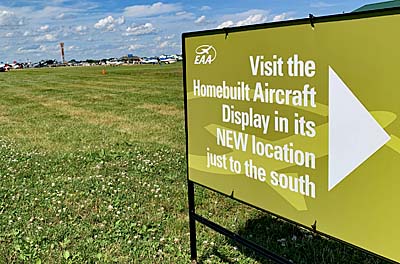 Cruising the grounds at Oshkosh, looking for aircraft to report, I looked around the all-new Homebuilt Area. This group has long occupied a fairly spacious grassy area in a good location south of the Warbirds Area, said to be Oshkosh’s biggest draw. However, for 2019 EAA relocated the area bringing vendors closer to the densest customer traffic, which may encourage more attendees to examine their aircraft. Several exhibitors I spoke to seemed content with the new location.

The new area had the usual collection of vendors, many of which qualify as Sport Pilot kits that can be flown with the certificate that needs no aviation medical. Quarters looked rather tight compared to past years, with airplanes somewhat shoehorned into the allocated space. Like all changes — and EAA has made a huge number of them in the fifty years the event has been held in Oshkosh — visitors and vendors will adapt quickly enough and soon we’ll forget the old “North 40” where homebuilt kits once displayed.

As I strolled through the new area, I passed by Van’s Aircraft, already thronged by the many enthusiasts for this biggest-of-all kit builders. The Van’s model that caught my eye looked to be almost ultralight sized (it isn’t an ultralight: RV-5 carries a few too many pounds of weight, too much fuel, and has too-speedy cruising speeds). 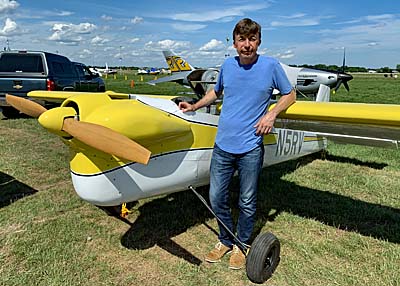 Truthfully, Van’s Aircraft Vice President and Chief Engineer Rian Johnson is only displaying a personal project. RV-5 was never offered for sale and won’t be now. Yet the light aircraft enthusiast in me noticed it right away. Probably like most other attendees I wondered, “What is that?

“Of course, we want people to focus on our current popular kits such as RV-8, -10, and -12,” quickly added, “but I thought Oshkosh visitors might enjoy seeing a bit of Van’s history.” RV-5 dates way back to 1975 when it was built by Dick VanGrunsven and EAA 105 chapter members to evaluate several design concepts. Among the goals of the group, Rian explained, were light weight and fuel efficiency. RV-5 was never intended for production.

RV-5’s wings swing back over the flat aft fuselage for easier transport or more space-efficient storage. No control linkages need be disconnected thanks to a clever center-mounted mixer that stays in place when folding the wings. 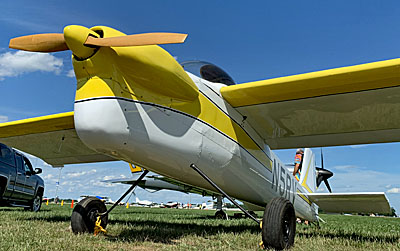 “Some years back, I was up in a loft storage area looking for something and uncovered a dusty airframe. When I asked Dick about it, he asked, ‘Do you want it?’ Be careful what you ask for,” Rian noted although he did eventually tackle the restoration project marrying the airframe of RV-5 to the canopy of RV-2.

The single seat design is small. A very lean Rian said he weighs 138 pounds and RV-5 is even somewhat snug for him so this is not an aircraft for pilots who tip the scales beyond FAA’s 170-pound reference weight. That hardly matters, however, as this is not an active project for anyone but Rian.

Needing only 40 horsepower to perform enthusiastically RV-5 is powered by a Rotax 447. Carrying 10 gallons of fuel, burning three gallons an hour at a 90-mph economy cruise, RV-5 has a range nearly 300 miles.