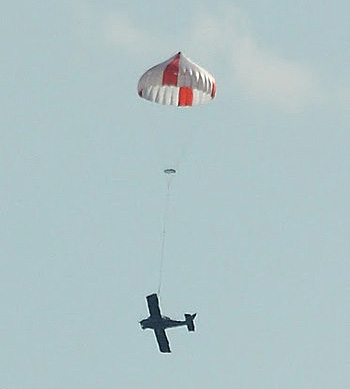 Enlightening news today from Vit Kotek, Marketing Manager for Evektor, that ties up the loose ends on the recent parachute deployment of an Evektor SportStar. *** Vit’s statement, edited only for clarity: *** “An accident of the SportStar RTC aircraft occurred during flight tests at Kunovice airport (LKKU) on 18th May, 2011. The test pilot was performing spin testing at aft C.G. The pilot successfully completed the program, after completing 30 spins. *** Then he decided to perform a maneuver, which we’re still not fully clear about, which put the airplane into a flight condition the pilot could not recover from. *** He activated the ballistic parachute system which deployed successfully. *** The airplane suspended below the parachute landed on a lake close to the airport and sunk after five minutes. The pilot swam safely to the shore. The airplane was fished out after six hours. The pilot was not injured. *** The event proves the proper functioning of the ballistic recovery system and its installation, even though the airplane was partially damaged. *** The accident is being investigated by the Czech Air Accidents Investigation. Evektor-Aerotechnik wants to note that the accident happened during flight tests and not during normal airplane operation. *** Further, more than 800 successful spins have been completed on the Eurostar and SportStar type since 2001 and tested airplanes always demonstrated very good spin recovery characteristics. *** The last successful spin testing of the SportStar type was performed less than a year ago, and all required abnormal control use techniques for spin recovery were tested. *** Microlight and Light Sport Airplanes are spin prohibited in normal operation.” *** Thanks to our good friend Art Tarola of AB Flight in PA, the Northeast Evektor guy, for that update, and we’re glad the factory confirms the pilot wasn’t hurt.