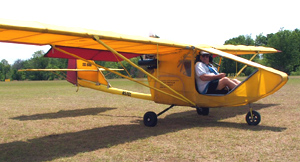 Back when the term “ultralight” was new…back in spring of 1982 before FAA issued their now-classic Part 103 regulation…and during the time when ultralights still had to prove themselves by being foot launchable…that’s when bold designer Chuck Slusarczyk introduced the first CGS Hawk at the then-new Sun ‘n Fun Fly-in. It was fully enclosed (you couldn’t foot launch it and all other ultralight were open cockpit airplanes). It had conventional three axis controls (unusual then). But this “outlaw” design proved to be a hit. Over the years, CGS and Chuck have sold over 1,500 Hawks! Now, fittingly, a Hawk has been inducted into the Florida Air Museum. Even more fittingly, this followed one last flight from the airstrip at Sun ‘n Fun’s Paradise City ultralight display area. At the end of the flight, Chuck taxied back one last time. It was a bit emotional to retire Hawk #1, he says.