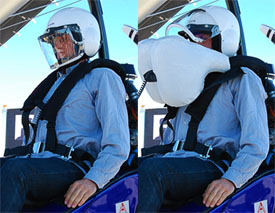 A trike airbag system is demonstrated at Sebring 2012. Variations on these emergency airbags can be created for other aircraft and are used in other sporting activities. photo by Roy Beisswenger 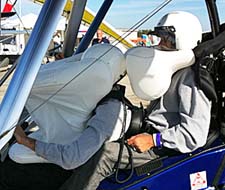 Airbags for both seats in a weight-shift control trike. photo by Randee Laskewitz 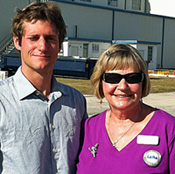 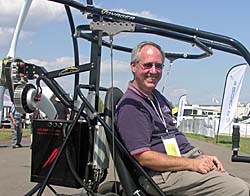 The Aviator Airbag System was introduced to America at the Evolution Trikes booth at the Sebring LSA Expo 2012 courtesy of Laurent Thevenot. Designed and manufactured for La Mouette in France by Helite, the complete system includes two airbags and sensors. For trikes, two different airbags are recommended. For the person in the back seat, the smaller vest (photo) is enough to protect the passenger’s head from snapping forward too quickly or too far in a crash, thereby preventing neck injuries. *** For the person in the front seat, a larger jacket is recommended. It also protects the wearer from neck injuries, but go further by protecting the pilot from the control bar, which could come rearward in a violent impact and break the pilot’s ribs. The larger jacket expands to 40 gallons of volume. *** The system uses a patented cold gas technology, unlike typical hot gas technology used in other airbag systems. It deploys very quickly, in just a tenth of a second. The system was originally designed for horseback and motorcycle riding and has recently been modified for aviation. Despite its appearance as a life jacket, the vest is not watertight and should not be depended on as a flotation device if you are flying over water. *** The system is advertised to take only five minutes to install on a trike or other aircraft. It can be powered by the aircraft’s 12-volt system or it can be independently powered by a small 9-volt battery. Powering it independently allows you to move the system from aircraft to aircraft a little easier. This is another significant contrast from the much-more expensive systems sold in general aviation airplanes; those are permanently mounted. *** The entire system of two airbags with G-force and attitude sensors weighs 4.1 pounds. In yet another clear advantage, it can be repacked by the owner in case it is deployed. Otherwise maintenance includes a visual check of the electrical contacts and the sealed high pressure gas cartridge for corrosion and leakage. *** Abid Farooqui, long associated with Evolution Trikes, said to look for the product to become available this May. They are accepting orders now for the product. The complete system is $2,345, although you can save a little by getting just one vest. While his new enterprise takes form, contact Abid at 813-786-8290.

About Roy — You probably already know Roy, or at least you’ve probably heard him. For more than a decade Roy has been producer of the UltraFlight, later Powered Sport Flying Radio Show. He also publishes a magazine of the same name dedicated to “Aviation for the Rest of Us.” ByDanJohnson.com is proud to have another talented writer like Roy join our editorial staff. Roy’s incredibly close contact with the recreational aircraft community will help us keep you well informed.