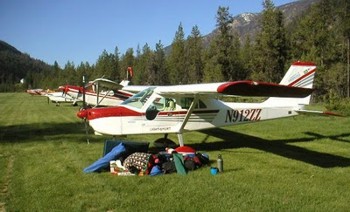 Paradise Aircraft, based in Florida, joins the Facebook crowd with its own fan page here.  Chris Regis, U.S. rep for the Brazilian-based company which has certified the airplane in the United States, Brazil, Australia and South Africa, tells me the company is moving ahead after a good spring sales performance with some company and product updates. *** On the Facebook page you’ll find an a aerial view of the new 75,000 sq. ft. factory for producing the Paradise P1.  The design just celebrated its 10th anniversary at the end of 2009. *** Carbon-fiber float maker Mead and Paradise have teamed up to offer amphibious floats for the P1. *** The camping picture from owners Neil and Karen Salmi shows the “stuff” carrying ability of the P1.  Not a lot of LSA could carry that volume of gear.  Of course the total 1,320 lb. LSA weight limit still prevails, but that large “backseat” area is attracting buyers, as cargo is one of the consistent limitations among many models. *** And check out the interior of the P1. *** The U.S. model is essentially an LSA-legal version of a general aviation-certified aircraft, with the two rear seats removed as LSA can only carry two people total – but all that space remains! ***    —photos courtesy Paradise Aircraft and Neil and Karen Salmi