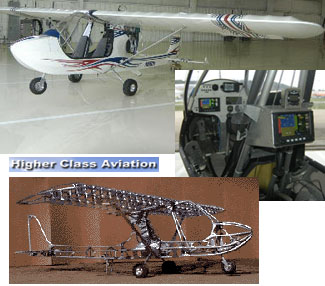 Super Hornet uses the 100-hp Rotax 912 and shows its ultralight ancestry by stalling at a modest 34 knots with optimal flaps. Empty weight is low at 630 pounds thanks to using an all aluminum airframe. More info? Call 760-518-0838 or send email.

Some observers think it looks like a Challenger (ultralight). But it’s made very differently and now it has another distinction. Producer Higher Class Aviation won their SLSA airworthiness certificate on July 18, one of the first of the so-called “ultralight class” to do so. Welcome to No. 54 in the SLSA sweepstakes and congratulations to boss Robert Gaither. *** The Super Hornet has a unique construction — “composed of many 1.25-inch diameter formed aluminum tubes and hundreds of computer-generated gussets, each designed to distribute loads evenly throughout the airframe” — that shows the significant airframe differences from a Challenger (photo). Despite the robust structure, Super Hornet is more modestly priced than most SLSA, starting at around $50,000. Of course, you can bid that up with avionics (photo inset), but you’ll still spend a great deal less than imported choices. Hornet cruises at 95 knots (109 mph), carries 18 gallons of fuel, takes off in 300 feet, and has a 690 pound useful load.