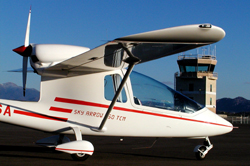 Pilots seeking a good flying, reasonably priced airplane now have another choice. Sky Arrow will retail in the mid-$60,000 range, says Hansen Air Group. Some 200 are flying worldwide with 25 in America. Read my Report on the 80-hp Sky Arrow.

The count of Special Light Sport Aircraft rose another notch, to 18 certified models, with the addition on November 4th of the Italian Sky Arrow design built by Iniziative Industriali Italiane, or simply 3I. Hansen Air Group boss, Jon Hansen — well known for his promotion of the also-Italian Tecnam aircraft — reported the news while displaying the Tecnam Bravo at the AOPA Expo, which concluded today. (The big organization’s annual convention featured 15 Light Sport Aircraft in a special area arranged through LAMA.) Sky Arrow has previously achieved a tougher certification, that of FAA’s Part 23, so the SLSA achievement may be taken in stride by those who know the design. More surprising is that the Hansen Air Group, with representation on east and west coast, has now brought four aircraft into the SLSA fold…more than any other importer or U.S. manufacturer. Jon indicated that his company would put additional focus on the Sky Arrow due to its excellent value.