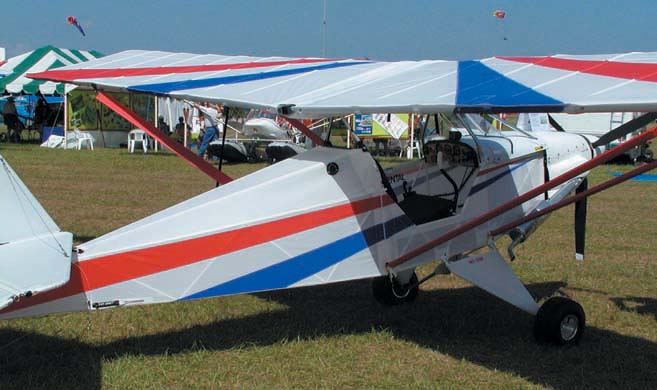 The Bearcat is the newest offering from Aerolites, Inc. 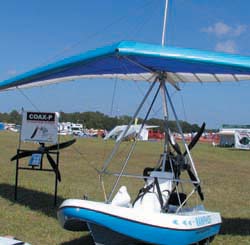 Flying boats like this Ramphos are versatile, fun and inexpensive compared to most floatplanes. 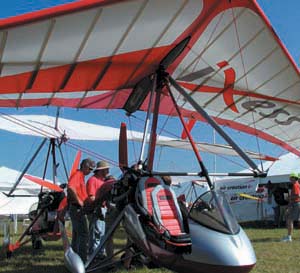 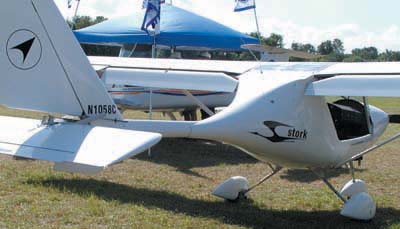 The Italian Stork design is available with Rotax 912 or Jabiru 220 engines for a fast, comfortable cruise. 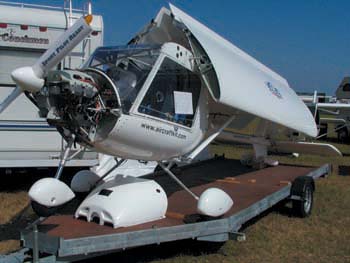 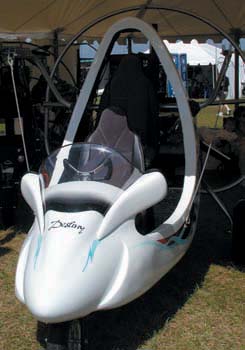 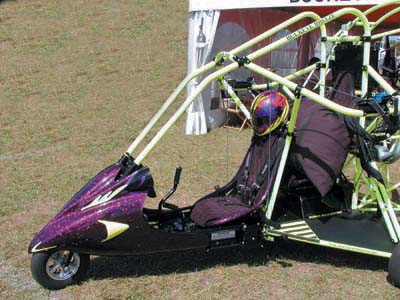 New ultralights and light aircraft were featured at Sun ‘n Fun
As flying season begins, Florida’s popular Sun ’n Fun airshow brings a focus on new aircraft of all types. Aviation writers review the new machines revealed at the event. Yet many machines are often overlooked in the rush to place the most attention-getting aircraft onto magazine covers and into survey articles. This month, we cover a few ultralights and light aircraft you should find interesting.
While aircraft like Titan’s T-51 Mustang, Just Aircraft’s Escapade, Airborne’s XT and Sabre’s Wildcat garnered lots of attention, designers of other ultralights have also been working hard.
Ramphos
One machine no one had seen before was the Ramphos amphibious trike. Though the amphibious trike concept has been used by numerous other companies, the Ramphos has features the others have lacked such as its counter-rotating propeller.
A prior model required a small vertical tail and distinguished itself by a composite hoop surrounding the propeller arc. However, company officials said new versions were able to drop these appendages for a cleaner look.
Its wheels retract into a fiberglass boat body, although you can obtain a Ramphos without the amphibious gear. Stainless steel is also widely used in the structural frame. This will be welcomed by operators who plan to use the rig in salt water. All Italian-designed Ramphos trikes feature the Hazard wing (which appears to fly beautifully despite its name).
Bearcat
Aerolites, Inc., has been in the business for quite a few years and has attracted a good regional following, enthusiasts say. However, almost everyone who knows the brand immediately thinks of a low-wing model that has been promoted as an agricultural micro-spray crop duster.
At Sun ’n Fun 2003, Aerolites indeed had the spray plane, but directly in front of its display was the Bearcat. This roomy single seater is a high-wing model with a parasol-style wing connection to a Dacron-covered 4130 steel fuselage.
With dual struts running from leading and trailing edges to the fuselage (unlike the usual arrangement which tapers to a single point), Bearcat appears to show its built-tough heritage. Despite the beefy construction, the Bearcat is said to work well with the Rotax 447, although you can use the R-503 as an option.
iXess
Air Creation, based in southern France, is one of the world’s largest aircraft producers with annual sales averaging 300 units. You won’t be surprised to hear that it’s also one of the largest trike builders.
You stay ahead in this business by innovating constantly, and Air Creation has set a high standard for this tactic. When the company with the red trike carriages introduced a new wing at Sun ’n Fun, it was almost expected.
The iXess may become the replacement for the company’s wide line of XP wings (11, 12, 15, and 17 square-meter models). According to company spokesmen, their Kiss wing has lighter handling, while the iXess is for faster flying (like the XPs). Jean-Luc Tilloy, sales director for the U.S. market, says Americans may pronounce it access—perhaps in a nod to American partner and importer John Kemmeries.
Stork
Another striking Italian design is the Stork (different than Storch), represented in the U.S. by American Ghiles Aircraft. The company became known to American pilots by selling the MCR 01 Banbi under the name Lafayette.
Stork has a shapely fiberglass body over a steel frame and is powered by a Rotax 912 or a Jabiru 2200. It has a roomy cockpit and is popular for its huge visibility. With two sizes of wings, the plane is available as the Classic, Highspeed (shortened wing) and Superspeed (separate flaps and ailerons).
What distinguished the plane at Sun ’n Fun was the folded-on-a-trailer display. It showed that you can store the plane in your garage or one side of a conventional hangar. Many pilots found that appealing.
Destiny and Buckeye
Powered parachutes continue their amazing development. While some think sales growth in powered parachutes has peaked, numerous competitors still push to take the idea further.
At Sun ’n Fun, two companies showed dashing new bodies or fairings for their powered parachute models. Destiny’s Fusion used an entirely new airframe with a simplified construction that looked quite robust. Yet it was the smoothly contoured fairing that got the attention of passersby.
Not to be outdone, Buckeye Aviation added a sweeping fairing to the front of its Breeze model. Complimenting the curvaceous lines of the nose pod is the glowing metal flake paint job that matched the finish of the vinyl seats. The Breeze, like the company’s Hornet model, uses fuselage bars that protect occupants in case of mishaps.
Cumulus 2
After a five-year absence, the Cumulus is back as the Cumulus 2. While the basic airframe is similar to the popular motorglider first introduced in the mid-1990s, the wing has changed significantly.
Original designer Jim Collie was killed flying the prototype Cumulus when a delamination of the bonded spar and D-cell structure apparently caused the machine to collapse in flight. Ultralight Soaring Aviation owner Dave Ekstrom put an engineering team together and found a way to fix all the original Cumulus models in the field. Once they are all flying, the company will begin producing the second-generation ultralight.
Ekstrom amazed those who watched him assemble the two wings on-site from a 35-gallon drum that contained all components other than the D-cell and spar. Interest was so strong that Ekstrom ran out of brochures and business cards.