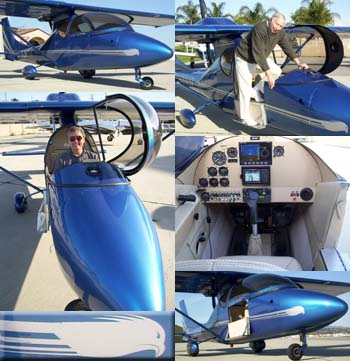 New Tandem — The A-16 Sport Falcon is a handsome, all-metal tandem aircraft designed for ease of entry — as shown top right by company proprietor Dave Saunders — and huge visibility. Its closest cousin among existing LSA is the Italian Sky Arrow but Sport Falcon is substantially roomier inside …and it is a Made-in-America design. Demo pilot Dan Rivera models at lower left.

Most of our tandem Special Light-Sport Aircraft — Legend Cub, Courier, SportCub, Savage, Hornet, Hawk, and SkyArrow — are recreational airplanes. Except for the last one (Italy’s smooth, composite Sky Arrow) most might also fall into the “bush” category in that they are slower-flying, fabric-covered, rugged aircraft suitable for landing on unimproved airstrips. *** A brand-new tandem, not yet officially a SLSA, is the MySky MS-1, which I call a “performance tandem.” MS-1 aims to go as fast as the category allows (120 knots) using its beefy 120-hp Jabiru 3300 powerplant. MySky’s entry also plans a deluxe interior not found in most currently-approved tandem SLSA. *** Recently I trekked to California to fly a few hours in the A-16 Sport Falcon from AviaDesign. Company principal, Dave Saunders, has enjoyed a long, successful career creating structural improvements for larger aircraft, including several Beech models, and he has now turned his attention to Light-Sport Aircraft, partly as it means less dealing with FAA and its bureaucracy. *** I’ll report more as this aircraft comes to market, but regarding my experience flying A-16: ** entry is about as easy as it gets, thanks to the “air stair” (just like some larger aircraft have; see photo); ** the interior is spacious and comfortable, more so than many other LSA; ** handling is predictable with no bad traits I could uncover; ** the airplane is well equipped and expects to have a price somewhere in the $110,000 range though this decision is still being reviewed; ** visibility is enormous, with the pilot sitting about four feet in front of the wing. Even the aft seat has good room, very good visibility, and full controls… it turns out my smoothest landings were from the rear.