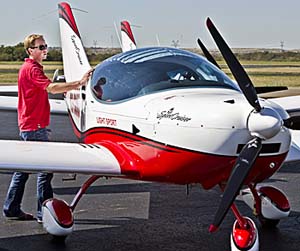 New president of U.S. Sport Aircraft Importing, Patrick Arnzen, checks out one of his company’s aircraft at their Addison, Texas home base. 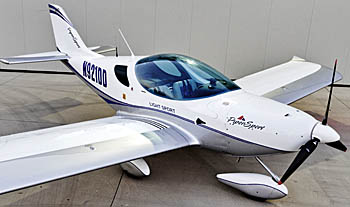 Piper renamed SportCruiser to PiperSport for a year period.

(Article udated) One of the most recognized aircraft in the LSA space is the SportCruiser, which ranks high on our LSA Market Share ranking (2012 figures). Solid in the #4 spot, they are likely to move up with another decent year in 2013, thanks to what some might call the “halo effect” of having had the Piper name on the airplane (photo) for a year, and now, a new owner. Don Ayers retired and handed the reins to his partner and new company president, Patrick Arnzen. Some thought that Piper’s quick in and out might be a negative, but that would be incorrect. Ayers once told me that his operation was the key company before Piper, during Piper, and after Piper so not much really changed other than temporarily wearing the Vero Beach company’s colors and gaining from their promotion.

In a recent conversation, Patrick explained the various activities that keep them busy including a bustling flight school operation in Addison, Texas (KADS). Naturally, they regularly assemble airplanes that arrive from Czech Sport Aircraft (CSA). The southern Czech company shook off the cobwebs from former ill-equipped management and has progressed well. In fact, they just appointed a new European distributor with the catchy business name Star in Sky as the manufacturer’s representative for Slovakia, Czech Republic and Hungary. In Europe, CSA refers to the airplane as the PS-28 Cruiser in a subtle nod to the old Piper numbering scheme, but VP of sales Matthew Harvey assured us in a video we shot at Aero 2013 (to be posted soon) that it is indeed the same airplane as American know. He reported that 500 of these aircraft have been produced, of which about 150 are flying in Europe. With around 200 flying in the USA, the company has done respectably well in the global market for light aircraft. SportCruiser also earned Type Certification for VFR Day operations according to EASA’s CS-LSA regulations and is fully accepted by FAA in the U.S.

CSA is also very pleased with the U.S. representative, with Harvey saying earlier, “We set ourselves a huge sales target of 30 units for the USA in 2013 and we really are delighted to be close to achieving this.” Indeed, our LSA registrations report to come out soon confirms the success of the American company operating as U.S. Sport Aircraft Importing (several videos on the SportCruiser models are available at the preceding link). SportCruiser is available with dual-screen 10-inch Dynon Skyview instrumentation together with additional enhanced features. CSA also referred to a new SportCruiser SVAP Light is based on the increased demand from the U.S. market for an entry-level Light Sport Aircraft that combines affordability and advanced features with the flexibility to upgrade. This version is also the result of an extensive weight reduction exercise carried out by Czech Sport Aircraft engineers, resulting in an increased useful load. Both new models are equipped in 2013 with Garmin 796 GPS and ADS-B Receiver. In addition, Czech Sport Aircraft continues to supply the SportCruiser Classic with analog instrumentation.