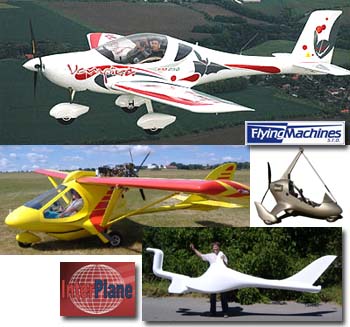 In the USA, Mystique (top) is sold in America by LSA America, Inc, which also sells the Skyboy (middle) by Interplane. The surprising image at bottom right is a new Part 103 project from Interplane called the ZJ – Viera. I’ll have more on the ZJ very soon.

In my work for the LSA industry since its birth in the summer of 2004, a common lament I’ve heard is that we have “too many…” new aircraft names, company names, importer names. These statements were from people actively working with the industry so newcomers are surely confused. *** Although I believed I had good information, for some time in SPLOG postings and in articles I’ve written, I’ve called Mystique an airplane from Interplane, the folks who build Skyboy and more (see photos). But Flying Machines, another Czech company, is Mystique’s creator. Thanks to Pascal Nelson of Greensboro NC for catching the error. Other websites I’ve visited also have it wrong, and while I’m curious how that happened, it’s now corrected everywhere on ByDanJohnson.com. *** Flying Machines was formed in 2004 and builds two versions of the FM250, the Vampire (for Europe) and Mystique (for U.S.). The company also manufactures the smoothly contoured all-composite Carbone weight shift trike and started with the B-612 single place, retractable gear European ultralight.