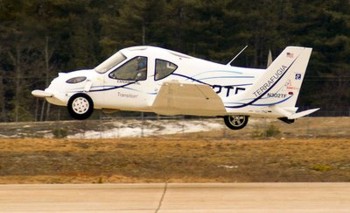 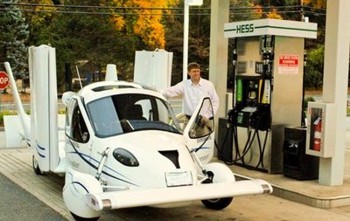 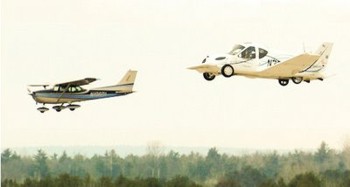 Terrafugia, an enterprising company made up of MIT grads, announced the successful maiden flight of the Transition® Roadable Aircraft Proof of Concept. Or, the flying car. Congrats to the company, I wish them success with the two-seater. *** The big idea here of course is one that’s been tried before without success: a road-worthy, street-legal vehicle that, after unfolding the wings, can be flown as a legal LSA from any local airport. *** Lest I forget to mention it, no, you can’t take off from the street in front of your house – unless you live in an airport community and your street is a legal runway. *** The flight followed six months of static, road and taxi testing, says Terrafugia. The car/plane is designed to cruise up to 450 mi. at more than 115 mph, ride at highway speeds with wings folded (which takes, they say, 30 sec.), and fits in a household garage. *** Motation is by front wheel drive on the road and a pusher prop in the air. *** And how cool is this? You can drive up and fuel it at a gas station: the engine runs on unleaded. *** The first hop pilotage was provided by Col. Phil Meteer, USAFR (Retired). Scene of the crime was Plattsburgh International Airport in Plattsburgh, NY. *** Of course, roadable or not, you can only fly this sculptured beauty legally with a Sport Pilot license. *** Once this Proof of Concept vehicle completes advanced flight and drive testing, a pre-production prototype will come next, to be ASTM certified before first delivery. *** all photos courtesy Terrafugia