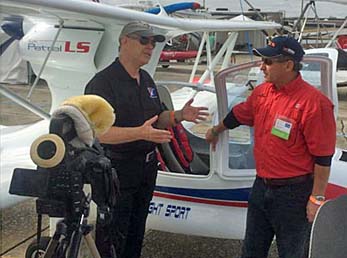 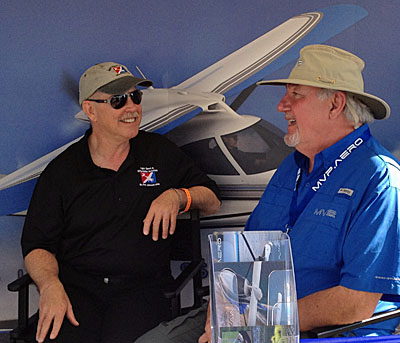 We keep up with fascinating development projects by interviewing people like Darrell Lynds. photo by Steve Pugh of MVP.aero 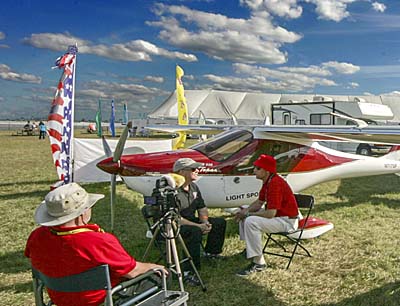 Getting the latest update on Ekolot‘s handsome Topaz from Kris Siuba.

Update 4/30/15 — On the unlikely chance that you don’t get enough of watching me on YouTube, Florida Aviation Network uploaded an interview from Sun ‘n Fun 2015. In this exchange I give some update on the industry over the last year and the state of LSA, as it were. See at the end of the article.

Whew! It was another full-to-capacity tour of Sun ‘n Fun where we scoured the grounds seeking interesting aircraft to report. I’m happy to tell you that we again spoke with dozens of designers about their creations and we think we do a thorough job in the light aircraft sector. In 2015, more than Light-Sport Aircraft, light kit aircraft, and ultralights, we are adding light general aviation airplanes or Light GA and drones (also known as UAVs, UASs, RPVs, RPAs … they go by several names, so new is the category).

While realizing that videos are enormously popular content on ByDanJohnson.com and Google YouTube, I’d like for you to understand how it is they occur. I mention this as one company we proposed to cover asked somewhat defensively how much shooting the video was going to cost them. Commonly, video shooting and editing runs about $1,000 per minute and can go much higher from a professional video organization. We charge the aircraft company nothing, zero, nada. In fact, this is significantly a labor of love done without compensation in mind. We tease about how it is our “volunteer job” in aviation. Click to see hundreds of free videos including a Video Pilot Report or VPR of Van’s Aircraft’s RV-12 in two segments (Part 1 & Part 2).

The process begins with my videographer partner, Dave, in this effort making the rounds seeking airplanes and people whose stories might be of interest. He’s become quite familiar to many in aviation who commonly see him approach on his “gimpster” as he likes to call it. He must use this as getting around is not easy with cameras, tripods, batteries, and all the accouterments of videography. Honestly, though it was not his choice to be dependent on his scooter, video man Dave soldiers on without complaining and has become highly effective at the process.

You don’t simply go around and find shiny aircraft at which to point a video camera. It is also necessary to know if an aircraft has new or unique qualities and to consider how it fits in the light aircraft segment. A script plays out in his mind and only after these steps does the shooting begin.

After Dave’s review — a multi-day process at big events like Sun ‘n Fun — he makes a list of the aircraft, engines, other products, or interesting people and we discuss how to approach them in the goal of getting a story you viewers will enjoy. As the subjects are scattered all over the grounds, it takes planning to do several videos per day and more time to find the right individual to interview. Personnel availability is challenging at busy events so we often have to wait our turn; it’s not diplomatic to interrupt a sales conversation to shoot a video.

My part of the job is often to pull the right person to their aircraft, to brief them on how the video recording will go, tell them how to position themselves so we show them and their aircraft in good light. We will often discuss what I will ask them — usually the same questions you viewers would ask had you the opportunity. Finally, we launch into it, trying to make as few takes as possible to minimize the post-production effort. Usually we do quite well but people get nervous with a camera watching them causing them to stumble. Not unusually a military jet roars overhead and we have to interrupt the process.

At the conclusion of the video recording, we ask permission to use additional video footage the company may have shot, capture still images, verify contact info and name spellings, after which Dave finishes the scripting and sends it off to get produced and published on YouTube.

The exercise demands more effort than may appear and is greatly aided by two of us who know this industry very intimately allowing us to efficiently gather compelling footage. We do this without direct payment from any company so you can depend on our objectivity.

I am pleased to report that I heard from many viewers at Sun ‘n Fun who said they watch lots of our videos and enjoy them. One man approached me and said, “I recognized you and wanted to meet you. I’m a boat captain working out of Dubai; I spend a lot of time watching you.” That’s satisfying to hear but without my great collaborator Dave, these videos would not be as good as they are. We are happy you enjoy them. We plan to keep making videos and we hope you’ll keep watching.

A Note of Interest — During Sun ‘n Fun 2015, YouTube turned 10 years old. In one decade Google’s video service has grown so much that every minute of the day, 24 hours a day, seven days a week … 300 hours of video are uploaded to YouTube.