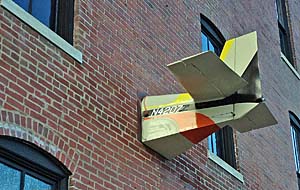 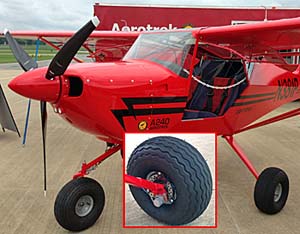 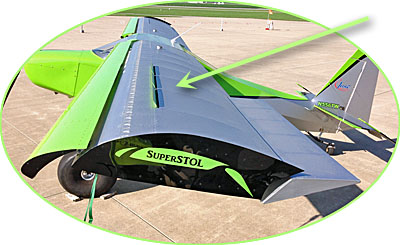 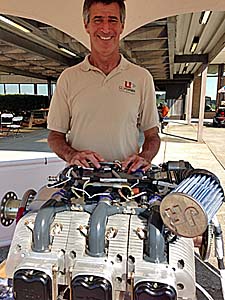 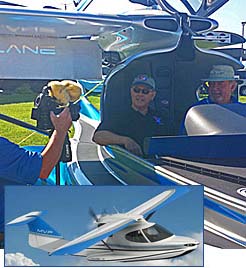 The sixth annual Midwest LSA Expo just concluded. These LSA-only events offer a more intimate setting where you can speak at length with an aircraft or other product representative. They don’t offer the dense traffic of the big shows but the valued trade off is that nearly everyone who shows is interested. People came from as far as California and I witnessed many demo flights. The Mt. Vernon airport is as good as it gets for this purpose with easy access to big broad runways and plenty of open airspace. Lead by energetic Chris Collins, a team of volunteers made it work again. When the event isn’t swallowing all their time these folks have a little fun. Don’t worry about the nearby picture; TSA and Homeland Security can calm down. This was a planned promotional venture on the side of a great new restaurant called Rare, a chop house. The airplane suffered a crash and the tail is all that escaped undamaged; thankfully, the pilot suffered only minor injuries. Now it’s immortalized … though the N-number was altered to protect the owner’s privacy.

Be creative and win an iPad. That’s the news from Sportair USA, importer of TL Ultralights (Sting and Sirius) and the Savage line of “Cubalikes,” to borrow Sportair boss Bill Canino’s word. Now the “Cub” part has to go. “In our enthusiasm for the Cub-S we overlooked something when we introduced it at AirVenture 2013 in Oshkosh,” said the Arkansas company. “The word ‘Cub’ is a registered trademark in the USA [that was purchased from the originator of the name, Piper]. Even though many manufacturers of kits and ready-to-fly airplanes do use Cub in the names of their products, that word belongs to someone who asked us to stop using it.” Being a respectful company, Sportair will cease using the “Cub” name. Indeed, that’s why they’re using a contest to rename the airplane. Sportair sells variations called Savage Cub, Bobber, and Cruiser but it was the Titan Stroker 180-horsepower Savage Cub-S that really raised the red flag for the name owner, perhaps as Cub-S is only $128,000, tens of thousands less than some other Cubalikes! So, if you come up with a winning name for this powerful variant, you could win one of three prizes worth several hundred dollars. Visit Sportair’s Name The Plane page.

Looking all bush, Cub-S — as it shall be known for a short time — is capable of landing on a creek bed or a lumpy turf field. Bush capability on Light-Sport Aircraft is more available thanks to new product releases. At the Midwest LSA Expo, RANS displayed their S-20 Raven on big tundra tires (video coming) as did Just Aircraft and Aerotrek. The Indiana company that sells the affordable A240 trigear and A220 taildragger — with a list price of $88,950 — can now be ordered with large tundra tires and this is on a nose-dragger. Nearly always such bush capability comes on a taildragger which configuration is not right for everyone. Insurance companies know tailwheel training is less common than it was many years ago and therefore getting coverage may require more training or experience. With the A240 in tundra tires for the same low price, you can have bush capability without a large investment. Aerotrek is a stable and successful importer that has steadily climbed the market share ladder now appearing in 10th place nationally and their order book stays full.

Just Aircraft just can’t sit still on their SuperSTOL. The airplane is selling briskly and chief designer Troy Woodland keeps improving this amazing aerial animal. It’s already a fascinating airplane to watch make incredibly short takeoffs and even shorter landings. Now, it will have even more control at its crawling approach speed because Troy added spoilers to the wings (arrow), joining movable slats, vortex generators, tip plates, and large-volume flaps. My longtime interest in gliders and soaring gives me familiarity with spoilers. I feel they are an underused flight control that can have a significant effect on the wing’s lift and, unlike flaps, they can be retracted quickly without adverse results. Indeed, when I flew the Cumulus ultralight motorglider extensively I became very accustomed to using them intermittently, in short on-off bursts, to control approaches to landing. For a super-short-field performer like SuperSTOL, this may prove a compelling idea and one more reason to consider this intriguing design. Just Aircraft has sold more than 500 kits and is going strong … no wonder with this steady development work they’re doing.

Rotax largely owns the LSA space so far as powerplants go at somewhere around 80% market share. Of course, Continental is never to be counted out with their O-200 series that lifts many airplanes including the new batch of “LSA 4.0” GA-like aircraft and Jabiru also serves both LSA and homebuilt fleets (the latter with no less than seven firewall forward packages). Plus, we have the D-Motor coming and Florida-based Viking remains busy in the homebuilt space. At the Midwest LSA Expo importer Robert Helm told us “most of the work is complete to make the ASTM declaration” for the UL Power engines to become available on Light-Sport Aircraft. The Belgium company hasn’t made a final decision to enter fully built aircraft due to liability concerns but Robert says he’s very busy handling warm response from homebuilders. He recently signed a deal with Wicks Aircraft to handle parts fulfillment, giving him more time to work with tech support for installers and maintainers.

KMVN is one of the best places for my video partner and I to shoot video pilot reports (VPRs). Over three days, we gathered footage for several new video interviews and VPRs. For the first time we used a new set of the new Garmin VIRB cameras. We installed a total of six cameras in or on each airplane plus shooting takeoffs, landings, and low-and-slow passes. Doing these VPRs takes one to two hours each — 30-45 minutes just to mount all the cameras. The slower pace of Mt. Vernon is excellent for these more comprehensive video productions. Once we leave the field, the real post-production work begins but watch for videos on the 180-hp Savage Cub-S, Rans S-20 Raven, Zenith 750 Cruzer, ICP Savannah plus several new video interviews. We hope you’ll enjoy them.