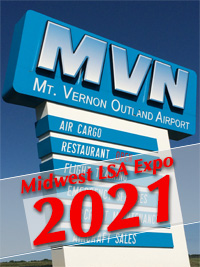 Many readers know I love this event, the Midwest LSA Expo at Mt. Vernon, Illinois airport about one hour’s drive east of St. Louis, Missouri. Led by capable, enthusiastic, and friendly Chris Collins, this has become a regular event for many… that is, many vendors, many pilots, and me. I only missed once when we were facing a major hurricane in Florida. This will my 12th but it is officially the 13th annual running of the show.

Nearby you’ll see a roster of expected vendors. Now, as we all know agonizingly well, these are strange times so things can change and some promises can’t be kept but the nearby table shows which aircraft Chris is expecting. I have my fingers crossed for all of them but Midwest LSA Expo has been a good draw and many vendors return year after year.

Why do people keep returning? Because pilots enjoy looking over aircraft in a more relaxed manner than is possible at crowd-jammed events like Oshkosh or Sun ‘n Fun. Airplane reps keep coming back because they make sales in Mt. Vernon. Many have said these smaller shows are better because they can spend the time with pilots as needed to answer all their questions. Once so satisfied, pilots in the market turn into buyers. It’s all good. 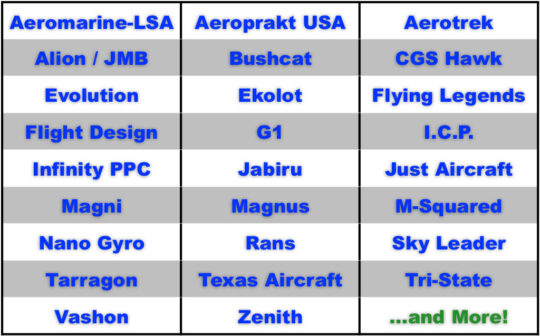 I saw the fellows representing G1 STOL at Sun ‘n Fun 2021, Oshkosh 2021, and they are on the roster for Midwest 2021. That’s an energetic airshow schedule and I admire the effort they’re making to put this interesting aircraft in front of the American pilot. 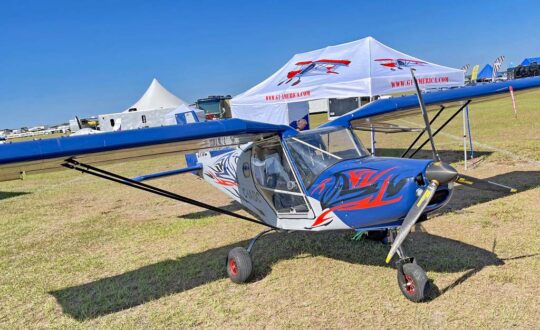 Several years ago, I interviewed a gentleman from France as he represented G1 at the German Aero show. I was doubly intrigued because his show G1 was fitted for hand control, something he said he did for himself. This is a hand-control-capable aircraft that can operate off-field, given its very short takeoff and landing operation.

The importer calls G1 STOL a “unique tricycle-gear adventure aircraft [that] can get you in and out of tight places without a tailwheel rating.”

G1 STOL, as it will be known in America, looks to qualify easily to be flown by someone using Sport Pilot privileges. Sold only as a kit, G1 America stated a 300 hour build time, a modest number for an aircraft like this. In January 2020 G1 was approved by FAA as an “Advanced Quick Build” kit, the U.S. representative said.

I look forward to examine G1 STOL much more carefully tomorrow and hopefully to produce both an article and a video about this machine for your review at home. That’s the reason why I keep returning to Midwest LSA Expo year after year. Join me in the next few days and I’ll report more like the aircraft you see here.

G1 America is the official American dealer for G1 Aviation of France. Founded by Lionel Neels of Belgium (living in Canada since 2016), the importer has contracted with American Mark Mellicker. 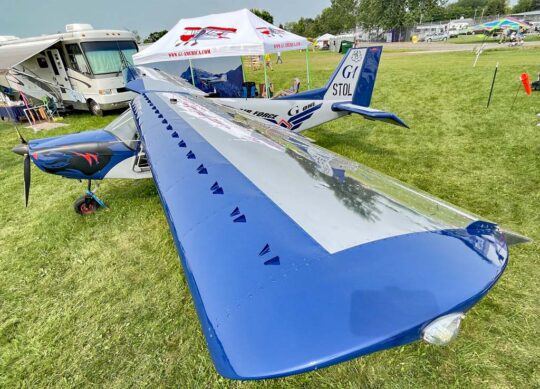 Last year, G1 America signed a partnership with Mark to put him in charge of all customers in the USA. Mark also offers a completion center and can give demo flights in Illinois. Mark flies a G1 STOL equiped with a Yamaha snowmobile engine conversion producing 140 horsepower.

G1 America said, “We provide support in cooperation with  our French team from G1 Aviation France.”

G1 Aviation in France was begun in ​2006-2007 by Serge Présent and Yvan Lhermitte when they created the G1 Gélinotte, derived from the Italian-designed Alisport Yuma airplane with several design improvements.

​”G1 STOL has been designed with two engine firewall packages: D-Motor LF-26 making 95 horsepower or the LF-39 version making 125 horsepower; and, the Rotax 912 series. “We are the master distributor of D-Motor engines as well,” the company reported.

Let’s see what else I can discover. Come on along…!