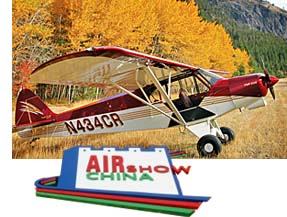 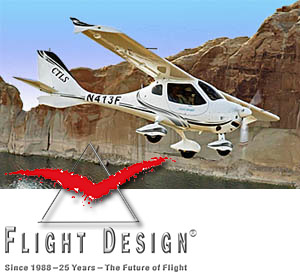 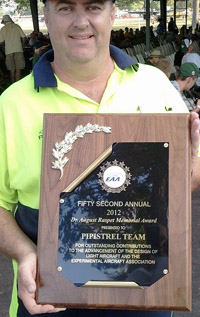 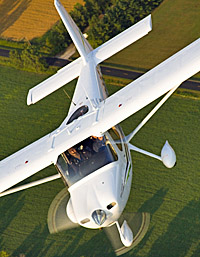 Good to Go in China Things are happening in China. “So, what’s new,” you say? “We’ve been hearing about China for months.” Things may move slowly in China but this week, Airshow China is happening in the southern city of Zhuhai and my colleague, Jan Fridrich is present. He reports that some LSA are displayed including Triton’s Mermaid and SC3D (based on the SportCruiser), Flight Design’s CTSW, Colyaer’s Freedom, and some other aircraft he is working to identify. Watch for a followup article. Triton is the new China-based factory run by Chip Erwin. ••• LSA leader CubCrafters gained Type Certificate approval in China for their Part 23-certified Top Cub. General Manager Randy Lervold said they have taken no steps with the LSA models but that they expect to pursue that in the future. Meanwhile, though the company announced the sale of two Carbon Cubs in Europe, they are taking a similarly measured approach using Permit to Fly privileges for now. “We’re feeling our way along,” said Randy about both China and Europe. However, he mentioned a commonly-expressed feeling among American producers that the USA opened its doors to European LSA but that restrictive regulations in other countries is less welcoming. Yes, you might bring an LSA to Europe but costly government approvals are offputting, perhaps explaining Cessna’s choice of using Primary Aircraft rather than pursue EASA’s particular form of LSA. Read more about private aviation in China.

Jubilee Jubilation LSA market leader Flight Design is beginning to celebrate 25 years in business. To commemorate the occasion, the German company will build a special Jubilee edition of several models in a very limited series of 25 airplanes adding a personal touch, a unique equipment list, a special two-tone leather interior, including leather instrument panel treatment, and a handsome 25th Anniversary theme exterior paint design (photo) along with purchase incentives. “Each 25th Anniversary Jubilee airplane will have an upper management ‘Godfather’ assigned to personally monitor its build process to ensure our extraordinary level of quality is attained throughout every step and detail of manufacturing,” said Flight Design CEO Matthias Betsch. America-bound models will come with the new fuel-injected Rotax 912iS engine and Dynon SkyView avionics featuring dual 10-inch displays and more. Contact the company for the complete equipment list. Happy Birthday, Flight Design!

Hitting 100 and 25 Speaking of success stories… consider Pipistrel. “This really important news kind of snuck up on me as a surprise,” observed U.S. representative, Michael Coates, “but I have just noticed that our multi-year cooperation with Pipistrel has resulted in selling our 100th aircraft recently!” According to Pipistrel boss Ivo Boscarol, “Michael is not just a great distributor and salesman, but also a true partner to Pipistrel through the last 15 years.” He added, “We owe a large part of Pipistrel’s success to Michael Coates and his entire team of local and international dealers from Australia, New Zealand and the United States of America.” Michael reported selling 20 aircraft in the USA at Oshkosh 2012 and in the two months afterward, a performance any LSA producer would love to claim. As a side note, given the announcement from Flight Design, Pipistrel was organized in 1987 thus completing its 25th year in 2012. Congratulations!

Troubles at the Top Even aircraft giants can have problems. Cessna issued work orders for more than 200 Skycatchers in an effort that has to cost the big Wichita company well over $300,000*. Can you imagine how that would affect a smaller company without the ability to write a six-figure check? Size has benefits, as those couple hundred customers will be professionally handled. Cessna issued a Mandatory Service Bulletin to repair problems with the wing structure of the first 228 Skycatchers delivered. Mechanics must add a rib and other reinforcement at the wing/fuselage junction where Cessna found some cracking on its factory evaluation aircraft. The action does not ground the airplanes; indeed, the work only has to be done at the next 100-hour or annual inspection. However, this is a big modification. Skin on the Skycatchers’ leading edge must be removed and replaced and new parts must be installed in the wing structure. Cessna says it will take about 32 hours to make the upgrade and the company will pay for the work. Skycatcher serial numbers 002 to 229 are affected. * Roughly $300K is calculated at 32 hours each at a minimum of $40 per mechanic hour for $1,280 each times 228 Skycatchers. Ouch!

YouTube LSA Sensation Thanks to some new measuring tools from Google, the owner of YouTube, video channel Ultralight News reported some big numbers: 5,000,000+ and 13,777,529. The first is views of the channel’s videos on YouTube, on which I am honored to collaborate (and you can see those on our LSA Videos page). The bigger number is minutes watched! Making this all the more amazing is that the minutes count only started on September 1st, just nine weeks ago. No matter how you tally it up it, that’s nearly 230,000 hours of watching light aircraft fly on the world’s number three website in barely more than two months! That sums to more than 3,000 hours per day… representing a lot of attention to recreational aircraft. Go, Ultralight News channel! You can support this work of video outreach by subscribing at The Light Sport and Ultralight Flyer.

Worthy Video In closing and speaking of video, I watched an encouraging interview of new EAA Chairman and CEO Jack Pelton done by Jim Campbell of Aero-News.net at the recently concluded NBAA convention. In his usual style, Jim asked a few tough questions and got solid responses from a clearly relaxed and ready man who once ran Cessna. As everyone in aviation knows by now, the Oshkosh member organization has seen major turmoil with the abrupt departures of longtime president Tom Poberezny and short time president Rod Hightower. Many hope Pelton can bring some calm and this video appears to show he’s up to the task. Take a watch for yourself.