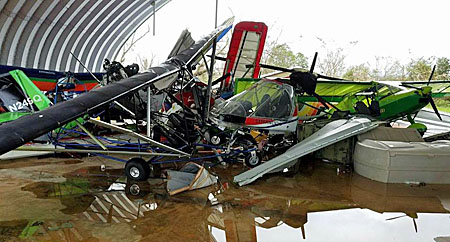 Here in Florida, home to ByDanJohnson.com, we take hurricanes very seriously. While you know they are coming, unlike a tornado, they are nonetheless incredibly powerful forms of destruction.

Hurricane Maria produced winds of 200 mph, enough that the weather gurus talked about creating a new category of storm called a Category 6; Cat-5 is presently the maximum. Whatever the label you apply to it, this was a major storm of almost incomprehensible proportions. 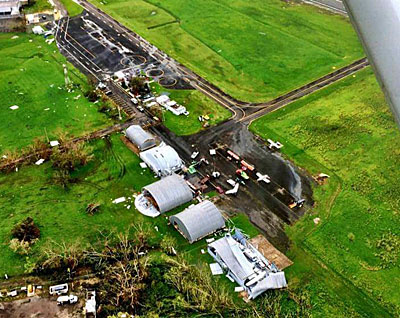 Damage to hangars in Arecibo airport,

We got lucky here in the Daytona Beach area. Once a hurricane comes over land, it begins to lose power. By the time it reached us, it was still pretty scary but not remotely like what had been seen in south Florida or in the Caribbean.

As most of us have heard, Puerto Rico was massively hit, enduring those 200 mph winds (four times as potent as 100 mph winds, which are already mighty frightening).

In September 2017, Hurricane Maria entered Puerto Rico like a battering ram, sweeping through the southeastern coastal city of Humacao and into the island’s history as its worst natural disaster.

Via Facebook, I heard from a reader asking questions about an ADS-B solution from uAvionix. At the end of our exchange, I asked, “How are things in Puerto Rico? U.S. media has gone rather quiet after much reporting on how bad things were, post-hurricane. What’s the real situation?” As a fellow aviator, I knew I’d get good info and he supplied details and photos about what happened to the island’s sport flying community. 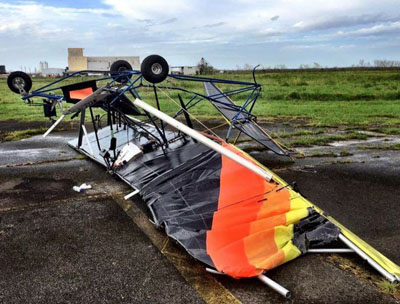 One of the SLSA Quicksilvers that was used for training was severely damaged. The other one in Puerto Rico is being repaired from damage it sustained.

“About half the island is still without electricity, mostly in the rural east areas, and about 15% still have no running water. I am one of the lucky ones with both services.” Note that this is more than 100 days after the hurricane clobbered the island.

“Communications are up in most places,” Rafael added, “but we have very slow access to the Internet with a lot of fiber cuts that caused communications failures around the island. There are still some refugees because of lost homes and they are still awaiting on help from FEMA. A lot of people lost their roofs.

“However, most people seem motivated and are getting back to some normality, but many businesses are still closed — some permanently — so there’s a lot of people without jobs. It’s been tough for most people, but we’re hanging in there.” 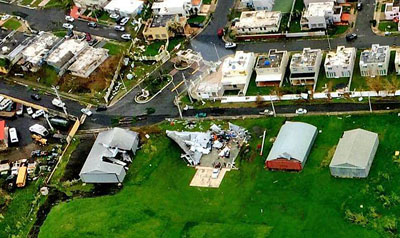 Damage to hangars in Humacao Airport.

Regarding sport flying on the island, Rafael added, “In the aviation area there were many, many losses. Sport aviation is almost non-existent now as about 90% of Light-Sport Aircraft and kit aircraft suffered damage that will be costly to repair (if repairs can even be done), and we don’t have any aviation insurance companies in Puerto Rico for non-commercial aviation.

“On the positive side, food, supplies, and fuel are back to normal for most of the island.”

Surprised by his comment about insurance, I inquired further, “Have aviation insurance companies departed Puerto Rico or were they never available? Do you know why not? How many aircraft were damaged” 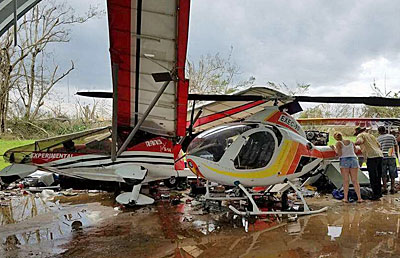 Another view of destruction in Arecibo.

“There has never been insurance for GA,” explained Rafael, “much less sport aviation in Puerto Rico, and U.S. companies cannot provide coverage because of a lack of local legislation allowing it.” I’ve heard about political leadership on the island being less than inspiring and this seems to reinforce that impression.

“There were at least 25 Light-Sport Aircraft damaged,” he reported, “out of about 30-35 that were flying prior to the hurricane, plus the GA airplanes that I have no account of.”

Thanks for the report, Rafael. I hope sport flying can eventually return to normal on this island that many tourists have viewed as a “paradise.” It is sad to see this level of destruction. I hesitate to report such misery but I’m sure mainstream media outlets will never cover this segment and I felt it was important.

Pictures were taken by Arland Miller, and Jose Amid Torres, and were publicly shared on Facebook. Thanks to all and best of luck, fellow pilots!