As happens at an Apple event, crowds line up outside the impressive showroom of Flying & Living. 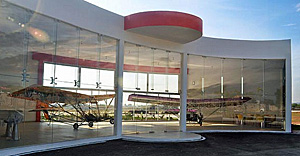 Few (more likely, zero) recreational aircraft dealerships can boast a showroom like this. 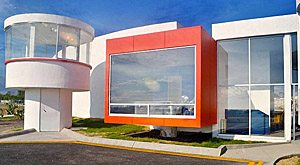 With a circular observation tower and beautiful facilities, Flying & Living has a lot to offer. 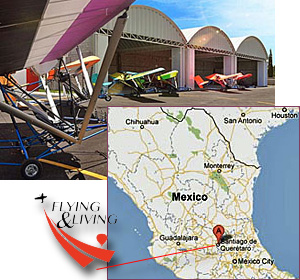 Plenty of airplanes (and hot air balloons) await visitors from Mexico and abroad.

One of the most storied companies in the entire light airplane space is Quicksilver. Their iconic models have populated the skies more than any other recreational aircraft brand… yes, more than Van’s (7,000+), Rans (4,500+), and Challenger (2,500+) combined! In fact, in 2002 and 2003, Quicksilver by itself outsold Cessna, Piper, and Beechcraft combined! Now, that’s a performance any aircraft company would love to match.

Recently this company, which has what our nation’s president might call “a good narrative,” acquired new ownership, the fourth such transition in the five decades it’s been in existence. Quicksilver Manufacturing became Quicksilver Aeronautics. Thanks to increased energy and fresh directions from Will Escutia and Dan Perez, the California company is attracting new retail businesses to become part of Team Quicksilver. One of the newest is Flying & Living LLC, located in Queretaro, Mexico. Here’s another reason for envy from other producers. Brand-new, custom-built facilities owned and operated by Isaac Castro are simply spectacular (photos).

About two hour’s drive from Mexico City — the third largest metro area on Earth with a population of 21 million people — Flying & Living built a strikingly handsome facility that is very rare for sport aircraft retailers. Customers are sure to view this location as an ideal place to enjoy recreational flying. The company offers fixed wing flight with Quicksilver aircraft or in FireFy hot-air balloons Classroom and other quarters are highly inviting and form an excellent role model for other sport aviation facilities. Flying & Living has a large and growing fleet of Quicksilver aircraft housed in several new hangars.

“We are very pleased to sign Flying & Living LLC with their very impressive operation. As the new owners of a company that Americans and aviation professionals in many other nations have loyally supported for several decades, we are gratified by the continuing support of dealers around the world,” said Will Escutia, president of Quicksilver Aeronautics.

“Since Quicksilver is one of the best-known brands in aviation, we are attracting new dealers in the USA and around the globe,” stated operations chief Daniel Perez. He referred to the company’s “15,000 aircraft flying in countries around the planet and with highly affordable prices and a superb safety record.”

Escutia and Perez will continue to operate Quicksilver Aeronautics in Temecula, California. The SoCal enterprise builds the MX series including the Sprint, Sprint II, Sport, Sport II, Sport 2S and the GT series including the single seat GT 400 and the two place GT 500. The GT 500 is the first aircraft approved by FAA under the Primary Aircraft category (1993). Quicksilver has dealers throughout the USA and the world with thousands flying in nearly 100 countries. Work is proceeding on Special LSA approval for the Sport 2S and the GT 500. Here’s a well-known company we’ll be watching closely.