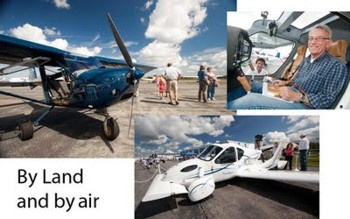 Last weekend, under popcorn-cloud, clear blue skies, the Greater Boston EAA Chapter 106 put on a doozy of a local LSA air show that drew several hundred folks. *** By my count 11 LSA models represented the industry, including the FPNA Valor (left), Flight Design CTLS (cockpit, right, with a guest and FD rep John Lampson looking on), and the Terrafugia proof-of-concept Transition “roadable” aircraft, in it’s final public appearance as work has begun on the Beta version. BTW…it drove in. 😉 *** The show was held at the lovely Lawrence Muni airport (good name) in Andover, MA, just north of Boston. *** The chapter created an enthusiastic, well-attended event that will stand as a good model for how to make it happen on the local level: pilots talking to pilots, not a big splashy corporate thang. Some demo flights, a local biplane ride vendor, and terrific food (bkfst or lunch, all you could eat for $5 or $7 – now we’re talking!) *** In addition to those shown and mentioned here and below, LSA that flew in included the *** Vans RV12, Sport Cruiser, Aerotrek A240 and Highlander Sport. *** There were informative seminars too – a great idea for any gathering. Joe Monaco talked about LetsFly, a shared ownership program that I’ve written about for my Light Sport Chronicles column in dead tree Plane & Pilot (two issues from now). Carl Dietrich, CEO of the Terrafugia Transition roadable car project, updated us on that program. *** And Lou Mancuso of Mid Island Air Service gave a thorough talk on buying and flying LSA. His FBO on Long Island is actively engaged in training and rentals with several LSA models.