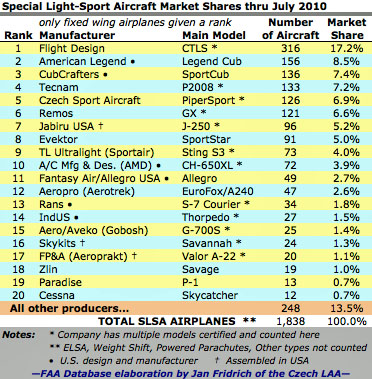 In the chart above, the Top 20 companies represent going businesses. Companies with enough registered aircraft to qualify for the Top 20 but which are insolvent or inactive were removed to present a truer picture of the current fleet of active companies.

While most of the LSA industry — as with most of aviation — endures unprecedented slow sales, at least two companies are showing reasonably good 2010 performances. *** Washington-based CubCrafters is the clear market leader for the first seven months of 2010, with 27 new registrations. We repeat, as always, that FAA registrations do not equal sales; individual company statistics may be different. Following CubCrafters is CSA’s PiperSport with 18 new registrations and Flight Design with an even dozen. *** All the Big Six companies remain the same — in their rank for the entire LSA fleet — though some shifting occurred: Flight Design; American Legend; CubCrafters (moving from 4th to 3rd ranked); Tecnam (3rd to 4th); Czech Sport Aircraft (builder of the PiperSport, 6th to 5th); and Remos (5th to 6th). These Big Six all have more than 100 registered airplanes in FAA’s database, though they are trailed by only a few airplanes by Jabiru USA and Evektor. AMD and TL Ultralight (up to 9th from 10th) are in a third tier of the top ten. *** Two companies advanced into the Top 20 rank positions for the first time: Paradise; and airplane manufacturing giant, Cessna. Other brands to watch include Arion, and FK Lightplanes. *** Of the three companies with the most action this year, CubCrafters has moved forward smartly. Flight Design is always a contender. But the main one to watch closely may be Piper. According to LSA project manager Russ Greenberg, the company is “on track to meet our January forecast of 75 airplanes sold in 2010.” Though their FAA registrations show 18 for the year, Piper reported 40 sales consummated by AirVenture 2010. If the company hits their target and if all were registered in 2010 (unlikely), PiperSport-producer CSA could dislodge American Legend in the number two spot. However, forecasting the future is hazardous at best; for true information we’ll have to wait for the final answer just before January’s Sebring LSA Expo.