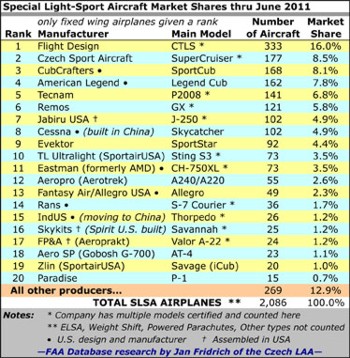 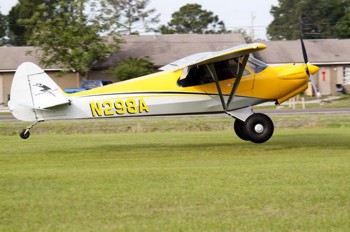 Winged buddy Dan Johnson and his colleague Jan Fridrich, head of LAMA Europe, just posted Jan’s exhaustive parsing of the LSA registration data and came up with some shockers. ***  Dan calls it the LSA Market Share Report. The first thing he notes is apparent stability in the marketplace: overall registration numbers for the first half of 2011 are about the same as last year, he says, so at least the industry didn’t fall off from that tough year. The pace is on track to better 2009’s 177 total registrations and 2010’s 202. *** In 2010, 48 came from Cessna, which, when subtracted from the total, gives you 154 for the whole year for the rest of the fleet. *** So, looking again at 2011’s first half of 126, subtracting Cessna’s numbers from the total of 126 yields just 72. *** Double that (144) and we could end up with even fewer registrations than 2010, (not counting Cessna) although at just 10 less it’s not an earthshaking falloff unless you want to be a worrywart and consider 2009, which had 177 total…and none from Cessna. But we won’t go there. *** As has been the trend from the beginning, just a handful — six this time — LSA companies racked up 92% of all new registrations! *** Remember, these aren’t sales on the book but previous (or future) sales, since these numbers only reflect aircraft registered from Jan. through June with FAA. For instance, several LSA might come in at one time to a dealer, who might register them all at once before selling any of them. Or vice versa: some already sold may not have been registered. Still, the reg numbers provide a pretty accurate glimpse of what’s really going on. *** And The Gang of Six?  *** Cessna: 54, for almost 43% of all registrations, on the strength of Skycatching-up in production *** CubCrafters: 20 for 17% *** Czech Aircraft Works: 16 for 13%, which includes formerly-badged PiperSports *** American Legend: 11 for 9% *** Flight Design (still #1): 10 for 7%. *** Jabiru: 5 for 4% *** That’s 116 aircraft out of the total of 126. *** Now if we throw in Aeropro (Aerotrek models) and its 4 registrations, those top 7 companies account for just over 95% of all 2011 registrations! That means of all the other 112 manufacturers, only 6 aircraft made the books.That, my friends, is a hard number to swallow for all those hardy, perservering companies who are still in the game mostly, as the numbers suggest, on a wing and a lot of prayers. *** Dan goes on to point out that eight makers have now sold more than 100 aircraft. In an economy as enduringly painful as a chronic bad tooth, that’s somewhat encouraging. *** And even though only 126 aircraft were registered since January 19th…well, 126 aircraft were registered since January 19th! In other words, the industry is not throwing in the towel, though it’s sure getting a drenching. *** Another bellweather of sorts: Cessna’s healthy production has for the first time tipped the market scales toward the U.S.: we registered more aircraft than offshore producers in 2011. *** Cessna is now 8th (13th six months ago), based on 54 Skycatchers registered. That’s like watching an insider stock chart shoot for the moon! *** And with a goodly percentage of those highly-touted initial 1000 orders still on the books, Cessna will only continue to leapfrog the rest at the top of the list for the foreseeable future, at least until purse strings not only among the merely well-off but the uber-rich loosen up, because right now, not many people in any income category are buying much of anything considered a luxury. *** Some surprising numbers, as my reader Thomas pointed out in a comment to my previous blog post: *** Five major makers, all in the top 20, narrowly missed striking out completely in registrations the first six months! *** Four of them — Tecnam, TL Ultralight (Sting), Eastman (Zodiac models) and Evektor (SportStar), failed to register a single ship. Only Remos tallied…one. It registered 32 in 2009! What’s happening here? *** Eastman is working on a comeback after several fatal crashes and a subsequent airframe redesign, but the other four produce a variety of excellent quality aircraft and enjoy good reputations. Pricing on any of their models is not by and large out of line with the rest of the market. *** Thomas goes into the shadows with this: “It’s not that there’s no demand: SportCruiser, Cessna, CubCrafters and Flight Design all registered decent numbers of aircraft. Was the owner experience of these other aircraft not so good? Support not there? Wrong features? Parts problems? Airframe failures? Or did the distributor simply bring in too much inventory, register it all at once, and then spend the last 2 years not registering any new ones while steadily selling off the inventory?” *** All are reasonable inquiries. I’m particularly drawn to his support and inventory sell-off conjectures. Airframe failures have been at a minimum. Owner experience is difficult to gauge: what one person tells a private buddy may never reach many public ears, rumor mongers though we pilots tend to be. *** It’s hard to see a clear picture for four of those five companies not tallying. It’s worth some digging; I’ll have Dr. Watson and my magnifying glass at the ready at Oshkosh, which starts in just three days!