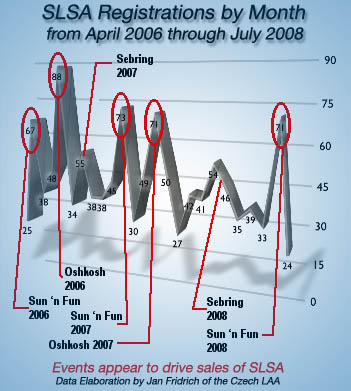 The LSA industry has done well to put more than 1,400 new airplanes in American skies in approximately three years. And we have yet to add deliveries of big companies like Cessna (Skycatcher), Cirrus (SRS), Icon (A5) and more.

Light-Sport Aircraft burst on the aviation scene in April 2005. By the end of that year, less than 50 had been registered with FAA. But in 2006, 2007, and so far in 2008, growth has been brisk…if somewhat erratic. *** It may seem a bit early to be blogging about an “historical perspective” on LSA, but looking at the trend line illustrates something I find fascinating. Sales of recreational-class flying machines closely track the major shows at which they’re exhibited: Sebring, Sun ‘n Fun, and Oshkosh. AOPA’s Expo also has an influence but it is less demonstrable than the other three. *** Also, you can easily see the effect of the 2008 U.S. economic slow-down that has afflicted general aviation as well as light sport aviation. (Even bizjets may begin to show this effect, according to experts, as their backlogs mean present-day strong deliveries were from orders placed in the economic high times of 2005.) *** Consumers of LSA buy them for fun flying as well as regional trips, so when the economy gets shaky, many pull back until they have a clearer view of what’s ahead. The good news is that current LSA businesses are rapidly building infrastructure — check the growth in our FIRM List as an example — and more new SLSA models are still in development.