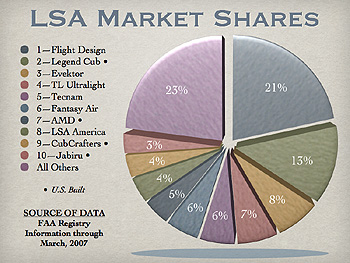 Since my last update on market shares, the changes aren’t dramatic. We now sit one week short of two years of LSA deliveries with 838 registered. This closely parallels my own count. Ten companies have three quarters of the market; earlier nine had 80 percent.

Lots of people want to know…customers, insurance companies, dealers, membership organizations, and, of course, all the manufacturers and importers. We all like to keep score. While I believe FAA data has some delay in reporting, it is a reputable source of info. Here’s what their registrations show through the end of March, 2007. *** Flight Design remains #1 at 21% — #2 American Legend remains the largest U.S. producer with 13% of all registrations. These two are followed by #3 Evektor at 8% — #4 TL Ultralights (StingSport) at 7% — #5 Tecnam at 6% — #6 Fantasy Air at 6% — #7 AMD (CH-601) at 5% — #8 LSA America (Skyboy) at 4% — #9 CubCrafters at 4% — and #10 Jabiru at 3% of all SLSA registrations. These aircraft account for 552 aircraft or 77% of 719 registered SLSA airplanes. A registered SLSA may not have been delivered to a customer. *** One surprise in FAA’s numbers is weight shift, which accounts for 103 registrations (12% of all SLSA); Air Creation enjoys the lead with over 50% — AirBorne has 40%. Powered Parachutes account for another 16 registrations or about 2% of the total. As with all such counts, changes will occur; a few significant players still don’t make a big impact on the totals but cannot be ignored.