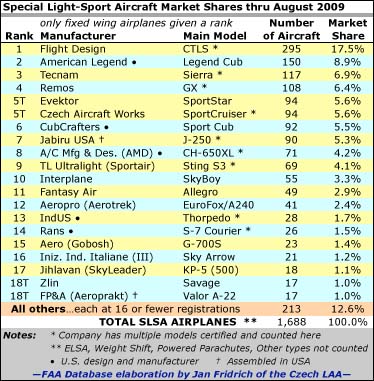 Top Guns — Since January 2008, or over the last 20 months, the FAA registration leaders are — in order: Remos; Flight Design; (tie) Tecnam and Czech Sport Aircraft; Jabiru, American Legend; CubCrafters; AMD; Aeropro (Aerotrek); TL Ultralight (Sting); and Evektor. These 11 brands account for 72% of all FAA registrations. As always, my thanks to Jan Fridrich for the considerable effort it takes to sift through FAA’s database.

As the challenging year for aircraft sales grinds on, Light-Sport Aircraft continue to hold their own. In tough times, when cash is tight, small enterprises may fare better than large companies. Their low expense structures, modestly compensated managers and employees, and lean manufacturing — as allowed by industry-standards certification — become strengths. *** But we see another quality. The half-million-plus general aviation pilots are more accepting of LSA today than three years ago. Organizations like AOPA are more fully embracing LSA, because their members are calling to ask questions. (Watch for a surprise LSA announcement at AOPA’s Aviation Summit in about a month!) GA pilots make up most buyers of LSA and those aviators now recognize the brands and have begun to acquire faith in companies certifying themselves (though many are still reserving judgement). *** Through August, a full month after AirVenture, the LSA fleet has grown to just under 1,700 fully-built aircraft not including ELSA kits or alternative aircraft like trikes and powered parachutes, nor any converted ultralights. The LSA market leaders have remained about the same and held their same positions (more info: chart). *** I see four up-and-comers to watch: Aerotrek (Aeropro); American producer, RANS; Gobosh (importing two airplanes); and Brazilian entry Paradise. In addition to the top-10 that hold three-quarters of the market, these four brands are working hard and moving up. In 2010, we’ll begin to see Cessna numbers plus a few new entries. It stays exciting here at aviation’s entry level. [UPDATE 10/7/09] CubCrafters identified additional SLSA not included in the accompanying chart. Such errors happen due to a large number of LSA models and the FAA database entry of them. According to better information, it appears CubCrafters has leapfrogged into the #5 slot, and the exclusive triple-digit club, with 100 total CubCrafters SLSA.