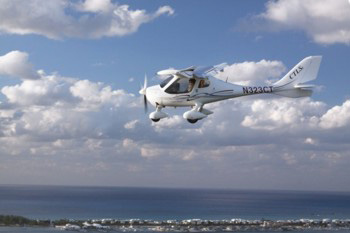 Dan Johnson shows off his formation skills in a Flight Design CTLSi over Bimini Island, Bahamas. 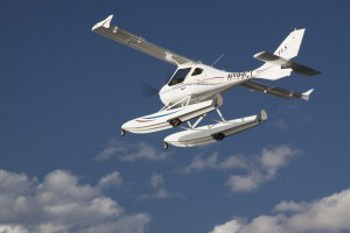 Tom Gutmann Jr. shows off the sexy lines of a CTLS on floats. 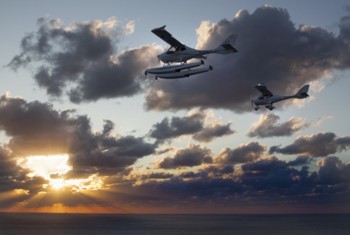 In a recent article from Flying Magazine, an editor volunteered his opinion that the Light Sport industry is on life support. There are so many good arguments to refute such a sky-is-falling assessment, it kind of makes you wonder why a respected journalist would go out of his way to attract a lot of heat in the first place … but that’s another story.

Dan Johnson makes a ton of solid rebuttal remarks in this article and in a video he did with UltralightFlyer.com — check those out.

Meanwhile, here’s a magnificent retort to the LSA-is-dead silliness: Airtime Aviation out of Tulsa, OK. Owners Tom Gutmann and his son Tom Jr. just delivered their Number 100 Flight Design airplane, a new CTLSi with a fuel injected Rotax 912 iS engine.

At Sebring I saw a bunch of installations of the new engine: it’s really catching on. Also got the chance to fly with Dan Johnson in his new (partner-shared) CTLSi for some air to air work in the Bahamas. He and Tom gave me some excellent looks over Bimini Island which I share happily and with gratitude to both those gents right here.

Meanwhile, 100 airplanes delivered does not an argument make for an industry in its death throes. Flying mag, I rest my case.

The Gutmann lads are a full-service dealership, offering sales, maintenance, upgrades and repair. This is the second CT for the lucky buyer, a veteran GA pilot named Rex Austin. He’s owned a Cessna 172, Piper Seneca, Bellanca Viking, a couple Mooneys and two Cirrus. Hey Rex, got any extra airplanes you feel like giving away to a needy aviation journalist I know? The instrument rated Private Pilot has single & multi-engine tickets in his wallet and has logged more than 2,600 hours in 30 years of flying. He says he likes the low operating cost and large cabin of the CT. Makes sense: he played basketball in school and at 6′ 6″, size matters in an LSA.

”The Flight Design is the only aircraft I have ever owned,” and that’s including GA aircraft, “that I didn’t bump my head on the roof in rough air.” He also reports his wife digs the added safety of the BRS parachute system, which comes standard on all the fast-cruising CT models.

Airtime’s GA veteran Tom Sr. started flying after high school, went to Spartan School of Aeronautics and bought the first Flight Design CT in the U.S. “What started as a hobby soon turned into Airtime Aviation,” says Tom, who got so much positive feedback on the airplane from local pilots that he became a distributor for Flight Design in 2003.

Tom Jr. joined the company and they’ve been a major force in light sport and Experimental aircraft in their area ever since. “We were the first to earn FAA acceptance for a Light-Sport CTSW in 2005 and the first in 2011 to win approval for the CTLS Floatplane,” added Tom Jr. Airtime Aviation is also a Flight Design Master Service Center.

In this economy, heck, over the last three decades, 100 aircraft sales is an impressive achievement. Congratulations to Airtime Aviation: you’re showing us how to make a success making us look good.