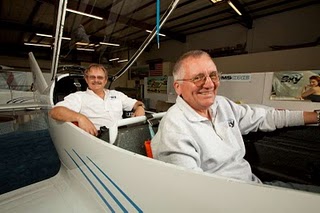 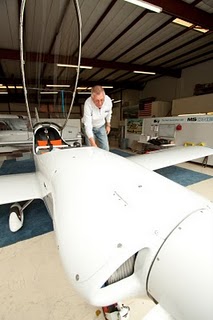 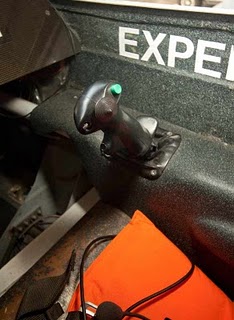 Side stick in MySky’s prototype MS-1. 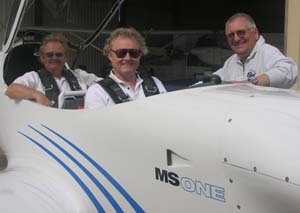 I had the distinct pleasure of closing out my 8 day stay in Florida for Sun ‘n Fun’s airshow with a visit to the MySky company at the fabulous Spruce Creek aviation community near Daytona, FL. *** My host was Prez Dieter Canje, who along with company principal and 30,000 hour pilot Tim Plunket, introduced me to the airplane. *** We were all set to shoot air2air and ground photography but Ma Nature had other ideas with some rain and overcast skies. *** I did the next best thing and copped a ride with Tim in the MS-1 prototype. *** And boy, am I glad I did.  Or dude, am I glad I did.  Whatever. *** First off, I have to say this was the best demo I’ve ever had, and here’s why: Tim spent a good ten minutes briefing me on the flight deck, controls, knobs and levers I’d be a-twiddlin’.  Then he talked me through the maneuvers we’d be doing. *** “I’ll do everything first, then you’ll do it,” he instructed, and that’s exactly what we did: stalls, high bank turns, big looping wingovers, high speed dives. *** “Remember,” Tim said at one point near the end of our flight, “there’s no rule against going faster than 120 knots in an LSA other than straight and level, full power.”  This, while we dove for the deck at 140 knots plus, smooth and solid and not unlike — I gotta say because I’ve had the pleasure — zooming down in a P-51 Mustang or Extra 300.  The feel, the lean and gutsy tandem cockpit, the fuselage right-side fighter-like control stick, the long bubble canopy… oh yeah, you can see where this project is going. *** I felt the urge to bark “Tally ho!  Bogies at 5 o’clock low, arm your guns!” because this is definitely a Top Gun experience compared to most other LSA. *** The company hopes to have the airplane in delivery by the end of the year.  Prototype #2 is being built in their hangar at Spruce Creek and more refinements will be made. *** But that flight with Tim stands in mind as the most thoroughly enjoyable and illuminating 24 or so minutes I’ve spent in an LSA yet. *** Stay tuned: Dan Johnson will be writing a flight report on it for Plane & Pilot down the road; see Dan’s earlier SPLOG post.