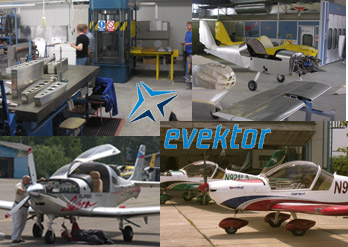 In Evektor’s clean facilities we see (clockwise from top left): a rib stamping operation, SportStars being prepared for the paint booth, finished Light-Sport Aircraft destined for the U.S., and technicians working on the Super Cobra, Evektor’s proposed entry to Part 23 aircraft.

On the same field in the southeastern Czech Republic as used by Czech Aircraft Works is Evektor, builder of the #3-selling SportStar. Coincidence? Not at all. This region, including nearby Slovak Republic and Poland, forms an aviation-intensive region that has attracted many companies. CZAW occupies buildings used in the Soviet era by Let Aircraft, a major producer of transport aircraft. In newer quarters on the opposite side of the airport is Evektor. *** Beside producing the first SLSA in America, Evektor is an engineering and design powerhouse. Of their several hundred employees, the company has nearly 200 engineers doing work for the aircraft and auto industries (which helped their success at being first to meet ASTM standards). Evektor builds an all-metal airplane using many components subcontracted to businesses in the area then assembling them into the beautifully finished LSA we see here in the U.S. According to Evektor America, more SportStars are in use in U.S. flight schools (~20) than any other LSA.