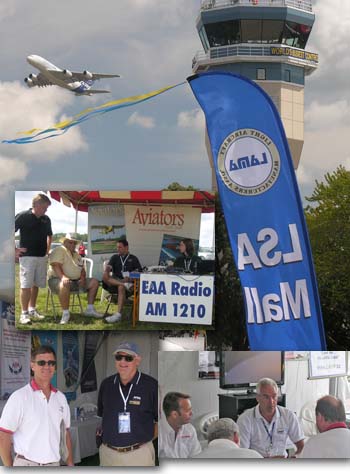 Viewed from the LSA Mall, AirVenture 2009 was much more than the summer’s big celebration of flight. Several important events tell a story of growing acceptance of LSA. Here’s a short list: LAMA hosted a meeting of G10 (the 10 largest LSA producers) and another of G5, while paying visits to every LAMA member in attendance. *** At the G10 meeting and again at LAMA’s press conference, Avemco president Jim Lauerman detailed his company’s support (in writing) for LAMA’s audit activities. His expressions were corroborated by Falcon Insurance VP Bob Mackey. *** Earl Lawrence, VP of government relations for EAA, brought brand new FAA administrator Randy Babbitt to the LSA Mall, where he met with presidents of LSA companies: Flight Design, Tecnam, Remos, and IndUS. *** At AOPA’s invitation, LAMA arranged a meeting for several LSA industry leaders with new AOPA president Craig Fuller. *** EAA Radio broadcast from the LSA Mall interviewing top producers from American Legend, Jabiru, among other industry leaders. *** Of course, for tens of thousands of visitors, the LSA Mall was mainly the place to find shiny new Special Light-Sport Aircraft including all the top selling models. And with the LSA Mall as an “anchor tenant” of the new AirVenture display area, other suppliers also took space in what is shaping up as the (unofficial-for-now) LSA Area. Thanks to confirmation from EAA leadership, who now view the LSA Mall as a “destination,” visitors to EAA’s 2010 event should again find the latest and greatest Light-Sport Aircraft in convenient proximity.