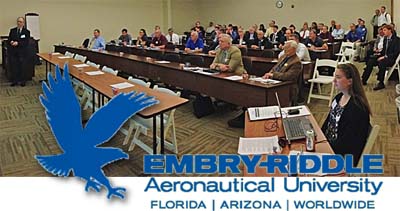 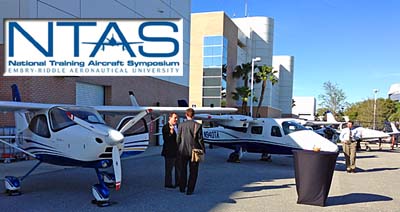 Tecnam presented their P2008 and Twin to university flight school administrators from around the USA. 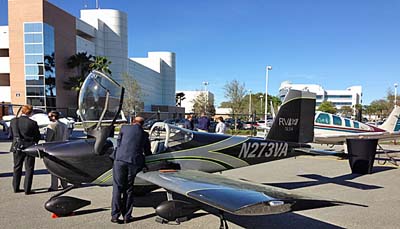 Piedmont Airlines has an attractive offer for employees who want airline flying jobs. Piedmont’s parent is US Airways, which merged with American Airlines.

Yesterday, filling my role as President of the Light Aircraft Manufacturers Association, I joined Tecnam and Van’s Aircraft as a group of about 100 collegiate educators met in their annual NTAS or National Training Aircraft Symposium. This annual gathering assembled an impressive group of academics who manage flight training for their university students.

It was a day of presentations with a special focus on the ADS-B Out mandate from FAA. For university flight programs operating dozens to hundreds of airplanes each, equipping their certified airplanes represents a major cost. Additionally, maintenance shops qualified to handle this cannot handle a large number of installations if owners wait until the deadline is near. It is estimated that an average of 34 hours of labor is needed per airplane. AEA estimates 105-166,000 U.S. aircraft still need to be equipped in the next five years. It can be done, they said, but not if many owners wait to the last minute to start.

Besides the central ADS-B issue, main NTAS organizer Peter Morton had as one goal the task of opening the eyes and minds of flight program leaders to the idea of Light-Sport Aircraft. We of the LSA community are grateful for his focus. So, how did that go?

At the end of the first day, following presentations from Cessna, Piper, Diamond, Cirrus, and Sporty’s (which has a refurbished 172 project), Tecnam and Van’s also got a chance to speak to their capabilities and offerings. During a free-exchange session at the end, it did not look promising for LSA use.

These big flight school operations have serious matters to consider before they try Light-Sport: cost and the investment cycles of larger organization (they don’t simply buy new aircraft on a whim); fitting a new aircraft into a fleet usually composed of many of the same airplanes; simulator integration (important as about a third of training is now done using sims); plus the attitude of students’ parents and what they think of Johnny or Susie learning to fly in a brand of airplane the parents don’t know. These are real concerns, so how might LSA providers enter the club?

Interesting to me, the answer came when Morton pushed a bit harder. After frank and honest discussions, the result was that if LSA manufacturers could provide an airplane and assistance for a period of time, several flight schools attending NTAS would give them a try. I considered this a breakthrough that made the couple-day event worthwhile.

I recognize that such an undertaking is no small matter for a LSA builder. Having to supply an airplane, to move it around, and having a well-qualified person employed to present the airplane with that individual’s travel expense can be a rather large investment. However, the payoff is that a successful effort could result in multiple orders and a new potentially long-lasting customer. Only a few of the larger LSA companies can tackle this but they and the university flight school operations could benefit.

Main meeting organizer Peter Morton wrote before the event started, “…[hearing about LSA] may be a useful wake up call for the educators, some of whom may have a prejudice that the way they have done things before is the way of the future. However, what is different now from the past is the capability and experience of the LSAs [and] the fact that new rules require between 700 and 1,200 hours of ‘practice flying’ for the portion of flight students who are not able to get a job being paid for instructing or other flying. Therefore, the contribution to reduced student costs for the education from LSAs in the early part of the curriculum and the [expense of] ‘practice flying’ is much more significant than it was before the new rules.”

The presentation I gave and those from Tecnam’s Shannon Yeager and Van’s Aircraft’s Wally Anderson spoke pointedly to the lower acquisition and operation cost of LSA plus the ability of manufacturers to be more nimble in making changes to their airplanes to better suit the collegiate flight training environment. Only time will tell if the effort will have a payoff, but it was great of Morton, NTAS, and Embry Riddle to let the LSA companies have a shot at the business. I also wish to credit the incumbent GA suppliers for maintaining a professional attitude about new competitors. Overall, the experience was worthwhile and educational.

Thinking about students needing to build time to capture airline or other pro pilot jobs, Piedmont Airlines recently made an offer to employees that sounds inviting. The Salisbury, Maryland company will pay qualified employees to build pilot flight hours. Employees who are pilots can seek to build time for flight crew positions and Piedmont will reimburse accepted participants up to $130 per flight hour for up to 300 hours. That’s a $39,000 commitment to each such Piedmont employee and shows the interest airlines have in developing the next batch of First Officers. For the offer, an employee would need to commit to fly as a Piedmont pilot one year for every 100 hours of reimbursed flight time.

Piedmont has a number of Embraer regional jets on order. The company partners with American Airlines and noted, “An employee who begins flight training at Piedmont today could be flying for American Airlines in five to seven years. There’s no faster pathway.” Reflecting on the NTAS group and the thousands of university students they train, the future seems bright for tomorrow’s airline pilots.